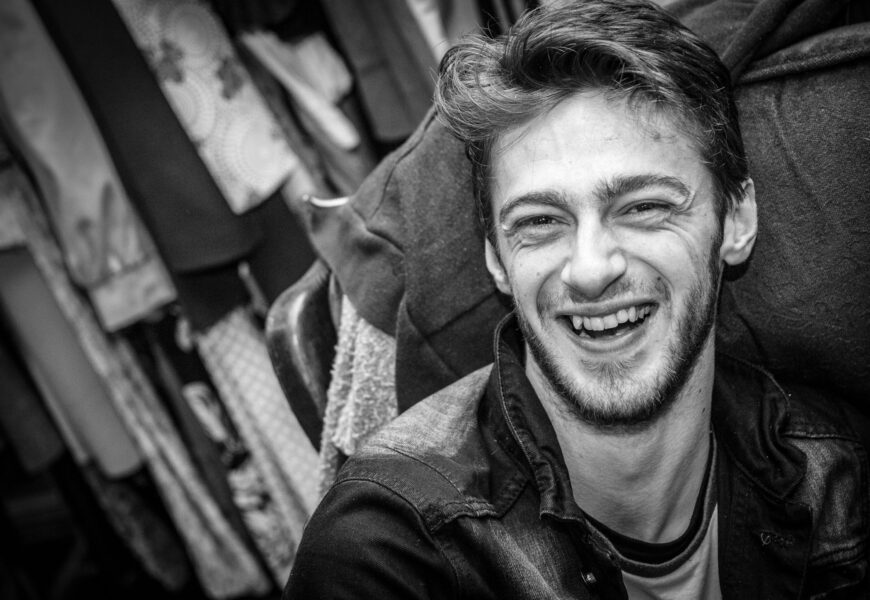 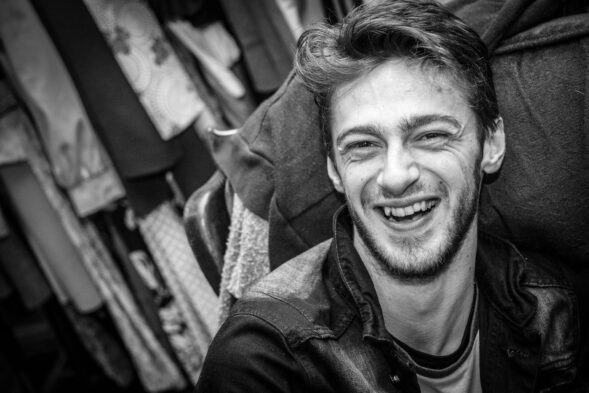 Adrian Kavanagh writes about the writing of his new play The Union.

Did you ever get that feeling, that you are exactly where you need to be? It happened to me when I first walked in the doors of Devious Theatre. They were residing in Kilkenny Arts Office, (the building is now gone) working on their In The Future When All is Well residency. They were casting for a play called Shifting by John Kennedy. Right up my street. As soon as I walked in I knew I needed to be there, to be involved. I was 20. I was cast as a cocky student, Eamon, who came down to party and get the shift. Typecast. The play was great, the people were great and the audience loved it. From that moment, I wanted to write something for Devious, something great. And now here I am, nearly 25, and they are about to hit the stage with The Union.

‘Why the fuck did I write I that, oh lord?’ This is what I would think to myself a lot during the past few months after I’d spend a night writing The Union and sending it on to John (Morton). I’d wake up after a few hours sleep knowing I had written something terrible in there and he was going to call me on it. It was too late though. John would give me the notes, tough but fair. And always right. He’d always give me inspiration though when needed. Stuff like, ‘You’re a great writer lad, you’ll get there’ or ‘Just get stuck in lad, it’s going to be great’. 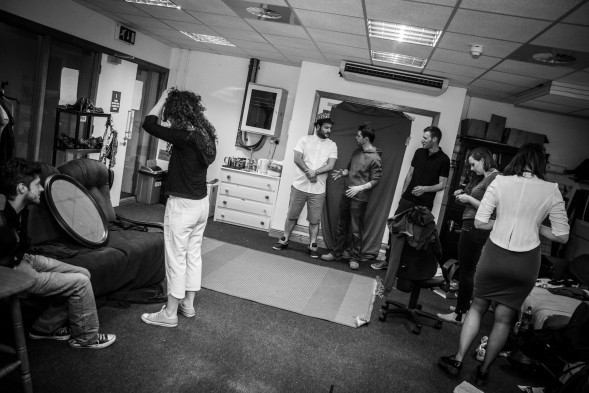 There was a handful of ideas I gave John years ago, but we all knew The Union was the one. Funny thing is, if this play had been produced three years ago, it would have been a lot different to what it is now. Ironically, I have spent a lot of time writing plays about college while I myself dropped out in my first year. The college was great, I love the college atmosphere and the opportunities but at the time, it wasn’t for me. I was heading in a different direction. I hadn’t a clue where I was going, I still don’t. I’m just chasing dreams and hoping I end up where I need to be. I remember feeling like everyone had it together, they knew where they were going. But from talking with friends who are now finished, there’s no difference. We’re all in the same boat. I think it’s all about the person, you’ve got to want it, whatever that is. Maybe you don’t know whats going to happen to you and to you I say, don’t worry, just make the most it, you’ve one chance to tell your own story, make it a great one. Maybe someday I’ll have a degree, maybe arts, psychology, something with a wide range of options. Who knows? For now I just want to make the most of what I have.

I’d written a few plays for Spark Productions before now, coming of age stories with lots of romantic storylines in them. But this play was different, you can have a lot ideas for stories, but the ones that stick are the ones that get made. Five students locked in a room, trying to figure out who stole 10,000, with an election looming and secrets lurking in the background. Now that’s a play. I wanted to write something that captured my generation, a play that was of the time and for people in their early 20’s right now in 2015. The last five years in general in Ireland, and across Europe have been crazy, it’s history happening right in front of us. 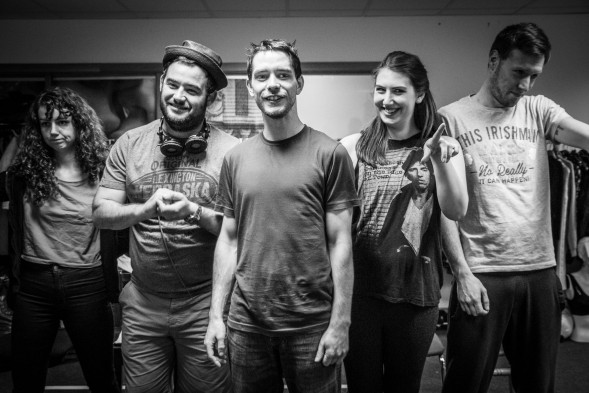 So much that could be done and said with just five characters in a room. In the early months I was feeling the pressure and to be honest I was sick of writing. I felt alienated and lonely and that maybe people were seeing a side of me that wasn’t me.’Who gives a fuck?’ I kept thinking. I got a stupid kidney stone twice in the early months and I was in horrific pain and while I lay in the hospital I thought to myself, I didn’t want to leave, it was peaceful. I had stopped watching films and reading and I just wanted to give up.

I love films, music, books and theatre. I’m the kid who wanted success and fame in a massive way because I watched my mother work twenty jobs to keep us fed and warm. For a while there I gave up, I was on the dole, felt like I had no chances, but now here I am, full time job, Devious producing something I’ve written and most importantly of all, hope. Still no girlfriend, but shur look. 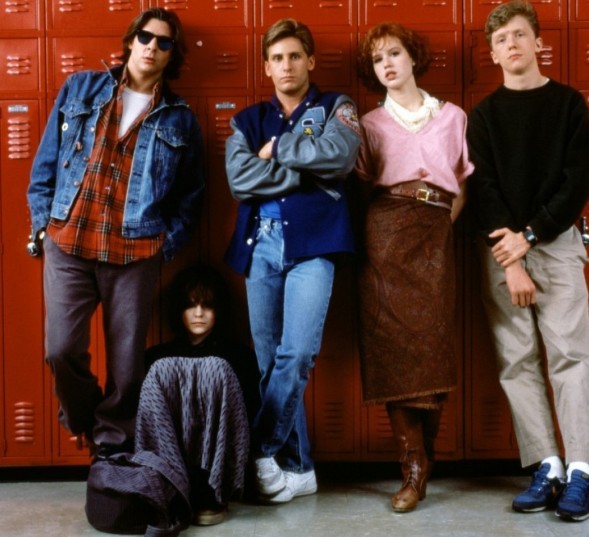 The first time I watched The Breakfast Club I was 16, it was on late one night on RTE. I stayed up and recorded it. I remember it so vividly, watching this story about five completely different people stuck in a room with one another, but at the same time, they were all in it together, although they were different. They still had the same needs. You watch that and you’d want to thank John Hughes for writing it. I wanted to do that, I wanted to write something great for any teenager who’s just trying to get through those crazy amazing years. If you haven’t watched it, then get off the Facebook and do so. The feeling you get watching it when you grow up is incredible and that’s how I want an audience to feel, I want an audience to leave with their sides sore from laughing, their hands hurt from clapping and a lump in their chest or a tear from their eye, because that made me feel great and I hope it does the same for you. Sharing that with an audience, in a room together, full of friends, with smiles on their faces, is something that brings me great joy.

If I was describe this play in a word… it’s a bomb. I wanted a play that felt like you’ve been punched repeatedly non-stop. John really wanted me to unleash the beast on this. From a writers point, I also wanted to do something that shows I’ve improved as a writer and that I’m moving forward. I’ve worked with Devious for years now, and you can’t believe how happy I am that they are bringing this show with a great cast to my hometown of Graiguenamanagh, a beautiful town full of great, funny people, that is rich in arts and character and just great people. Over the past few months of seeing the support from my close friends and seeing the support of some great people at home, I now feel like moving towards telling those stories, the stories of a great town, about the people I know. Like Passion Machine Theatre Company did for the people of Dublin in the 80’s with works from great writers like Roddy Doyle and Paul Mercier. Stories about the family man working hard to help his family. The stories of how a community can come together. The stories about embracing our ruralness and the greatness of that. 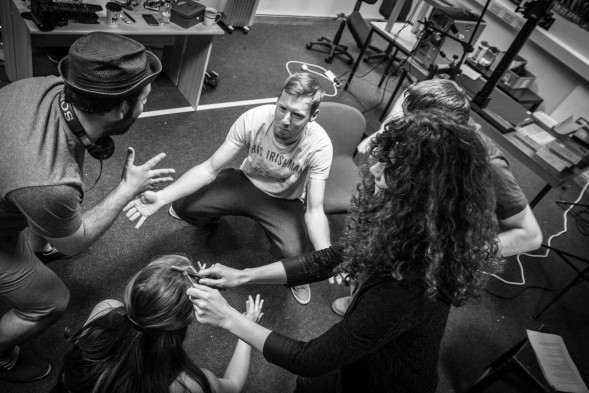 For all those who have seen my work before, my friends, my family and anyone at all really. I hope you come to see this play, because I wrote it for you. I want you to leave laughing and knowing that the 10 or 12 quid you spent on a ticket was worth it, it will be. Without an audience or support, what’s the point? And yes I know Ed Sheeran is playing July 24th and 25th and fair play to him but if some ginger kid who used to busk on a street can make it to Wembley Stadium, then maybe anyone can? Maybe we just have to think there’s a little ginger kid in all of us. Just like John Bender did at the end of The Breakfast Club, I might someday have that moment where my fist hits the air and I walk proud for achieving something. Maybe someday I’ll have great success and be able to give back. Right now all I can do is write. Try my best. Keep going. It’s going to take strength and it’s going to take heart, but I think that comes from the people you know, the people who you support and support you back and I guess I need that. I think we’re all looking for that moment at some point in our lives and I hope you all get it. That fist to the air. That walk away. That rock tune blaring in your head knowing you made it.

For all those who have and will support, I thank you. It’s more appreciated than you may realise. Love Adrian ‘Razor’ Kavanagh. 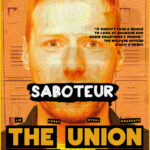 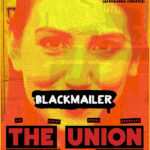 Next Story
The Vice President