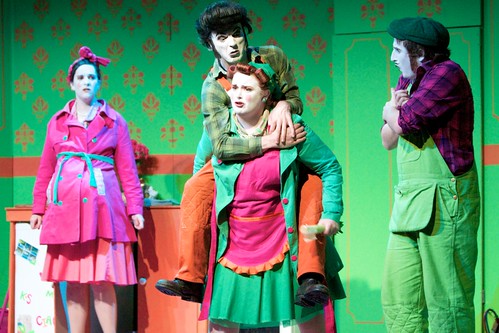 There is a famous scene from an episode of I Love Lucy in which Lucy and Ethel go to work on an assembly line in a candy factory. Caught off guard by an ever-faster conveyor belt from which they are supposed to be wrapping chocolates, the overwhelmed pair soon resort to stuffing their mouths, their blouses and their hats – anything to get them out of this tight spot. The laughs pile up as well, as the situation becomes more and more outrageous.

This was precisely the 1950s sitcom spirit captured by the Devious Theatre Company’s production of Dario Fo’s Can’t Pay? Won’t Pay! in the Set Theatre from Wednesday to Sunday of last week. In this case, it was shopping that piled up, followed by white lies and tall tales that stretched and stretched and stretched…

It all begins with an innocent trip to the supermarket by Antonia (Angela Barrett), who joins a group of women revolting against rising prices by paying half-nothing, or nothing at all, for the products. Arriving home, however, she realised that her husband Giovanni (Ken McGuire) “would rather starve to death than eat stolen food”. So she convinces her friend Margherita (Hazel Fahy) to hide some of the produce under her jacket – a fine idea, except that it makes her appear heavily pregnant, much to the surprise of her husband Luigi (Ross Costigan). The long arm of the law (a Sergeant and an Inspector played by David Thompson, who quadruples as an Undertaker and an Old Man) then sets out to catch the culprits across the city of Milan.

“It’s not a story, it’s an epic”, Antonia says at the outset, a promise that the bright-hued production lived up to through out.

Devious Theatre is known for its impeccable attention to detail, from costumes and sets to programmes and promotions, and in this case every exaggerated gesture, every mirrored movement, every raised eyebrow, every pregnant moan was expertly executed, so that by the time the ‘pregnant’ Margherita and Antonia are lying on the floor, struggling in turns – and in vain – to sit upright with their large ‘bellies’, you’d feel you should be ROTFL (rolling on the floor laughing) along with them.

The idea of the play is that people should stand up and do things for themselves instead of waiting for someone else to lead the way – which is exactly what Devious Theatre has always done.

Our thanks to Tess Felder for the words.