We Too Will Drink To Pub Theatre

HometheatreWe Too Will Drink To Pub Theatre 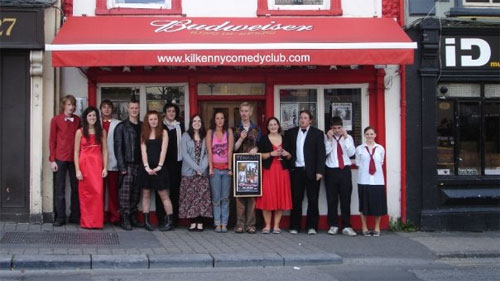 So I had a completely different post in mind and lined up for today, but having been prodded by another of my own extended family (who happens to be a great actress herself – and no, that’s not to score brownie points) to Peter Crawley’s piece on pub theatre in today’s Irish Times, I felt it was worth a response.

The piece, in today’s ‘Ticket, centres around the upstairs at The Plough on Dublin’s Abbey Street and the comeback of pub theatre.

Pub theatre, an age-old phenomenon that reached its zenith here in the 1970s, appeared to wane during prosperity. Now it’s making a comeback. As you read this, a long room full of promise above The Plough on Dublin’s Abbey Street is being prepared for theatrical use (see panel, page 21). This involves draping its cheery walls in black, banishing all natural light from the room, and de-cluttering a small area up front for performance.

It’s a modest space, currently marked only by a new sign that reads “theatre” and bears a small arrow to show you that its managers (the actor and director, Karl Shiels, the writer and director Paul Walker, and the technician Andy Cummins) mean business. When there’s no money in the economy, they decided, you can either drown your sorrows or raise a toast to bare boards and a passion.

Pub theatre holds a special place in the hearts of the acting community in Kilkenny. Whether it was in the back of John Cleere’s on Parliament Street where many a fine production has been staged over the past two decades, to running three plays a night in Kyteler’s on Kieran Street (theatre in there long since gone), or in the back room of any other establishment locally or around the county for that matter, many a local group has opted to “raise a toast to bare boards and a passion”. We fall right into that group as well.

Over the past four years we’ve been lucky with venues having notched up performances in Cleere’s Theatre, The Barn, Rothe House, Watergate Theatre and Set – all that just locally – but only one of those venues is a purpose-built function theatre (for theatre). But for us, it all started in the pub, and Cleere’s Theatre to be precise.

It’s not that far back to 2006 and our first production, Heart Shaped Vinyl. We had considered booking into the Watergate, staging a massive production for our first – given it was a familiar haunting ground to those of us forming the group having spent the best part of ten years treading the Watergate’s boards – but we looked at things in reality. A new group. A new comedy. A new bunch of actors. Hardly a penny between us to get something off the ground. Where better to start than the pub? I had already been using Cleere’s for a year at that point as a live music venue for the Kilkenny Music gigs, and being familiar with the space, and knowing the look we were going for, it seemed ideal.

Don’t let the name fool you. While affectionately known as a theatre and having staged and hosted some great names from the acting and music world down through the years, the theatre in Cleere’s isn’t more than a stone-walled back room space that would hold about 60-70 people at a max when seated. The tiered seating I remember as a child is long gone, replaced by the chairs we used to have in secondary school, the lighting is simple but I would recommend you bring your own gels, and if it’s a busy night, you can expect an interruption from one of the bar staff who have to cross the stage to get into the keg store to change a barrel. The door into the space is by no means soundproofed, but the stage door itself is so thick that you have to listen through a crack in the wall for your cue. The fire doors lead out to another pub’s beer garden, slightly problematic when the pub in that space (in 2006) would leave it’s back doors open and pump horrendous club tunes into the beer garden and subsequently into the theatre space, barely dampened by the temporary curtain hung over the door. The odd night would see glasses dropped or broken midway through a nail-biting monologue delivery, the scraping of chairs on the floor a sound you know you would never get in a furnished theatre space. And going back to Peter Crawley’s article –

“The only way it becomes a theatre every night is by an act of communal will.”

And so it did. We were reaching out to the community, trying to entertain the community. And of course, people coming to the venue knew there wasn’t any tiered seating, knew it might be a bit cold, or a bit hot (depending on whether we’d left the heating fan running), but for two hours a night for each performance of Heart Shaped Vinyl, they came, they drank, they laughed, they told their friends, and the cycle started all over again. As they continued, so did we.

Heart Shaped Vinyl returned for an extended sold-out run in the summer of 2007 before being resurrected one final time in October of the same year as part of the Rockfall Festival, both performances taking to the stage at the back of the pub. Then last year (2009), having played a museum in June, the Watergate in July with Stags and Hens, and knowing a trip was on the cards to Set Theatre for Accidental Death of an Anarchist, we managed to return once again to the pub for four performances of Shakespeare In Bits, again in Cleere’s, again with the pints and this time with a different pub next door pumping the tunes in under the fire exit.

The Bridgebrook Arms took up the ball then in Thomastown this past November, unveiling The Red Door Theatre and three nights of short plays from new group What’s On Tom? John’s verdict on the space being

…a fantastic small scale theatre and the folks there should be commended on the marvellous job they’ve done with it. A long yellow curtain (donated from an old cinema I was told) and a warm lighting scheme helped create a lovely theatre atmosphere. And it’s also got to be pointed out that the seats were very comfy indeed. You’d be surprised at how many theatre’s get that one wrong and do your derriere a complete disservice.

Collectively, the actors within Devious – for the most part – cut their teeth on the Watergate stage. But as Devious Theatre actors, particularly those of us involved in founding the company, ours were cut in the back of the pub and it’s quite possible that a part of our hearts, or at least mine, lays there.

I’d read another article online yesterday that said something like “the safety net will appear when you leap”. That will be my advice for the day to anyone thinking on starting up a theatre company, or group of friends looking to perform a show. Don’t worry (yet) about having to book a big theatre space, or hire professional lighting designers, stage managers, technicians. Don’t worry about costs. If one of your local pubs has a back room, then take the leap. We did it nearly four years ago and we’ve been flying since…

5 Replies to “We Too Will Drink To Pub Theatre”