Well, it’s nearly due to arrive.

Due to the fear of mastering Scottish accents, authentically depicting junkiedom and doing Irvine Welsh’s masterful text some justice, we’ve being giving rehearsals the entire sock drawer the past few weeks.

We’re nearly at the stage where the entire play is blocked, the scenes are looking in pretty decent shape. We’re lucky to have such a good piece of core material that gives the actors so much to chow down on. Harry Gibson’s adaptation has put a lot of lovely theatrical devices into play and we’ve really relished the character’s asides, narrative monologues, multiple playing, abstract scenarios and musical sequences. Yup… I said it… musical sequences. We had our first rehearsals last week with the drug paraphernalia and it was pretty intense to be honest. Everybody was a little bit freaked out by the sight of the needles and syringes. Horrible, sharp fuckers. We had ourselves some cooking lessons, so to speak, just to get the hang of preparing heroin. It’s gonna need a lot of practice but we’ll get there. We want to be very responsible with this production and we don’t want to give any false impressions of heroin addiction or the use of the drug so we’re trying to be as authentic as we possibly can be with the portrayal of drug use. Of course, we drew the line at preparing with real heroin….we just used gravy. Suffice to say, it smelt manky. Don’t ever try and heat gravy up with a spoon and lighter. As some of you may have seen, Paddy Dunne’s wizardry on the design front has so far produced 4 amazing character posters with another 5 in the works. Not to mention a main, all encompassing poster and the teaser poster of our take on the iconic Trainspotting skull motif. So yeah, Paddy’s been a busy man and I’m sure he’ll be offering some words of wisdom on his creative process in the coming weeks… when he finally gets to drag himself away from Photoshop of course. All in all, 11 posters for a 5 night run of a play might be seen as being too much but fuck it, it costs us nothing but our time and imagination… and a little blutac. We get very excited by this whole theatre lark and we’d like to get other people excited about it too, likesay, ken?

The costumes are looking lovely too. Well, as lovely as drab costumes for a bunch of junkies, thieves and psychopaths in 1980’s Edinburgh can look. Most of the bits and pieces have been put into place and the look of the characters is taking shape. We’ve gone back to the book for ideas on how the characters look, rather than fall into the trap of emulating some of the film’s designs. You wouldn’t believe the amount of people who were quite taken aback by the fact that Ross is not sporting the Ewan McGregor shaved head look. Instead, we’ve gone with Mark Renton as he is in the book, a pasty faced unhygienic ginger sort. And as you can see from the Renton character poster he’s sporting a ginger do that’s reminiscent of Bowie during his Berlin era.

We’ve had a lot of design meetings these past few weeks and the set is also coming together pretty well. Eddie, our set designer, has been drawing up his plans and stock piling material and it’s going to be a lovely ramshackle mess methinks. Check out our ‘Trainspotting Design’ album to see a couple of ideas and visual pointers for the look of our production. It ain’t pretty that’s for sure.

We’ve also just embarked on our PR blitz and we’re trying to get the play out there as much as we humanely can. So, pass the word around!

The tickets are booking for the play so if you wanna ensure seats 056 – 7761674 is the number to ring. We’re 3 weeks off the play at this stage which is absolutely mind boggling. I’m gonna go now and be a little terrified. 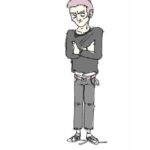 We’re officially a week away from the opening of The Hellfire Squad in Project Arts Centre. Then it’s another week away from...
Read More → We’ve arrived in the Watergate Theatre finally. And we are now one day away from opening the Irish stage premiere of Night Of The...
Read More →