Through The Square Window… 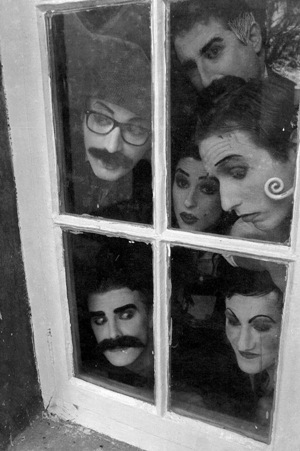 In the parlance of Accidental Death Of An Anarchist, we’ve jumped through the square window, cleared the fourth floor and there’s three more floors to clear before we hit the ground. That’s a fairly over elaborate metaphor but hey, it works. So we’re 2 nights down on the play with 3 more to go.

The run has been great so far, enthusiastic (if not modest) audiences who have been whooping and hollering throughout. It’s a great validation of the hard work pumped into this play that the laughter is so consistent. It’s like a sitcom being filmed in front of a live studio audience. The audiences have been very generous and very receptive to something that looks so starkly different from anything they’ve seen before in Kilkenny. Coupled with the Set Theatre (which has proved to be a very comfy theatre going experience), it provides a very unique evening’s entertainment so we’re delighted with that.

The actors (not including myself here, as it’s quite hard to critique something you can’t see) have been on the ball. And as I said to Ken last night while we were waiting at the bar for a much needed post show sup, it’s great to see the characters getting a laugh just because they’ve said something, not because of what they said. These characters are so heightened and exaggerated that they’re getting a laugh just for opening their mouths. Which is a pretty good sign I think. So all in all, it’s going good so far.

But as our good old friend Bertie Ahern would say ‘A lot done, a lot more to do.’

One Reply to “Through The Square Window…”