They Call Them Remakes 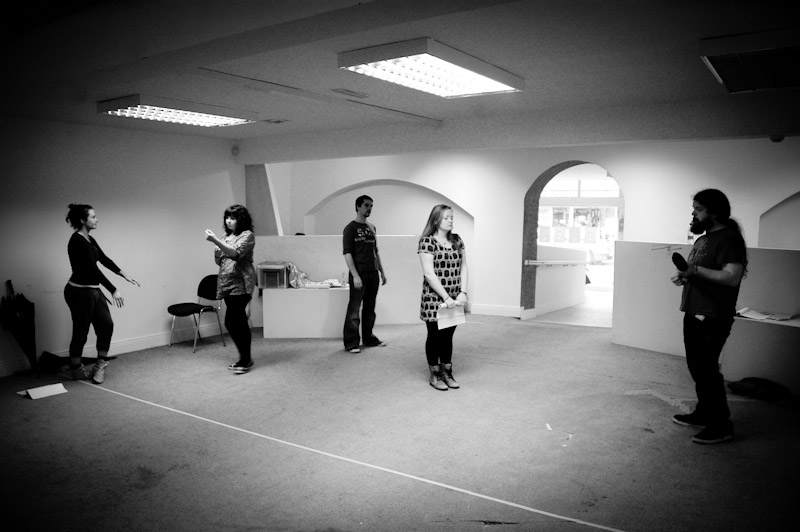 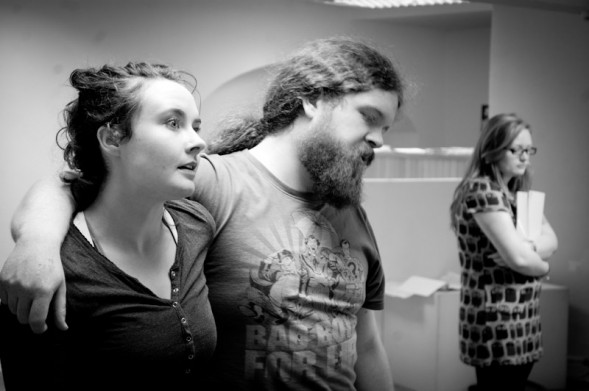 In the movies at least. In theatre, it’s restaging. And that’s what we’re doing. The cinematic vibe being given off is that we’re presenting a play that wants to be a musical. A movie musical at that. So yeah, our cross pollination of the forms is fairly heavy for our second production of Smitten. Or in movie terms, the remake.

This is the first time we’ve done a major restaging of one our plays. We’ve had occasional chats about bringing Smitten back every so often but nothing ever materialised until last summer when the opportunity to become artists in residence in Kilkenny Arts Office arose. It made sense for Smitten to be a part of the In The Future When All’s Well season. It’s about twenty somethings finding their way in a country that doesn’t have room for them, that won’t shape them into responsible adults the way it did in their parents day, where the future is of your own making but the options aren’t good. It’s about forsaking fantasy and embracing reality. So in short, it was perfect for now. 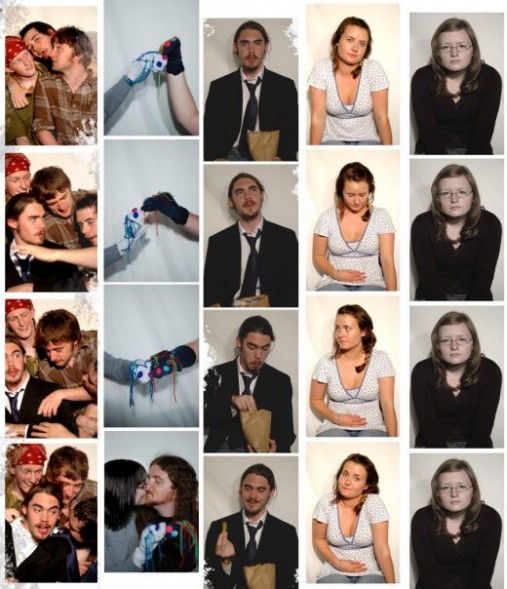 A promo image from the first version of Smitten in 2008.

However, we felt that the version we performed in The Barn in 2008, whilst a respectable effort, had an awful lot of fat to be trimmed. It was initially written more in the style of a musical but as we approached summer 2008 the large freight train that was the Trainspotting production took up a lot more of our time and resources than we imagined. So Smitten became a little neglecterino and didn’t receive as much nurturing as it could have. We ended up with a crammed 5 week production and rehearsal spell. With a lot of hard work and a lot of help from Barnstorm Theatre Company we pulled it off. It sold out every night and we got good reviews which was a bonus. But we all felt the play never quite took off. A lot of it was my doing: too many storylines, too many concessions to the quick production, too much jammed in. With hindsight, we probably rushed it.

I reworked the script throughout 2010 and again during the residency in No. 76 between Scratcher and Shifting. Here’s some of the changes to this production:

1. A Play That Wants To Be A Musical

So we’ve re-envisaged the play as a musical. Well, it’s not even so much a re-envisaging as it is a reintegrating. The musical element of the story (introduced by the musical making Daffney Molloy character) was there in the original script but when the first version went into production everything ended up getting downscaled due to time and production constraints until we were eventually left with a play that had a very unsatisfactory amount of song and dance. The main thrust of Smitten is the contrast between the fantastical projections you have of your life when you’re older and how mundane real life actually is. And musicals were always the most interesting way for me to explore that. What better illustrates the differences between fantasy and reality than jumping into song and dance at random moments when the emotion overpowered you? 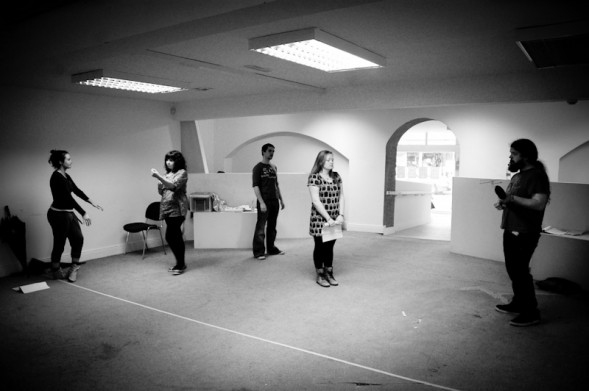 We have a wonderful choreographer in Gemma Grant and she’s been knocking us into shape the past few weeks. Not all of us are natural dancers (I make a concession here for the members of the cast who claim they are) so it’s been a challenge. We’ve seen a lot of musicals where a lot of amazing singers and dancers struggle with acting. We’re just doing it the other way around!

There were definitely too many story threads running through the last version of the play. With hindsight, more time and a kick ass editor would have worked wonders. I’ve lost 3 characters and 2 storylines. It all feels a little more aerodynamic. Like Ken’s new haircut.

We have a lot of the same cast as the last time, which was something we didn’t think we’d necessarily get after 3 years. We’re missing Ross Costigan, Stephen Colfer, Niamh Moroney and Geoff Warner Clayton from the original line up. But out of the 10 strong cast now, 9 were in the first version of the show. The newcomer is David Thompson. He was washing his hair the last time. Some roles have been rejigged too so it’s freshened things up considerably. 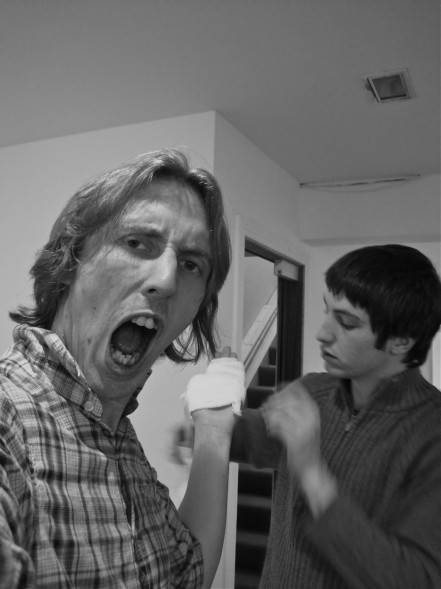 It’s amazing how much changes and how much it stays the same at the one time. When we first performed it in August 2008 recession was very much in the air and the show referenced the shit that was about to hit the fan and was it worth sticking around for it to happen? 3 years on I decided to keep the play in 2011 as opposed to 2008 and focus on what happens when you do stay here. The storylines actually took on a whole new resonance without changing very much. A lot of the concerns are the same, only more pressing now and it’s opened up a lot of new avenues for the characters. 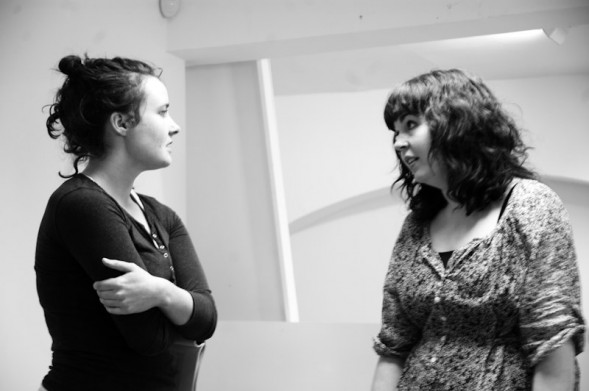 I guess it’s as simple as saying there’s a lot more reasons to go now than there was back in August 2008. But there’s always hope and that’s one thing that’s stayed consistent in the play. And reality too I suppose.

We get to tour Smitten this time and we’ll be bringing it to Cork for the Solstice festival on June 16th. We’re very excited about taking the company down to Cork and doing our thing in front of a Cork audience. In this case, dancing and using our acting.

Apparently, there’s a heatwave on the way this summer. You wouldn’t know because it’s been the shitest of Mays but yeah, it’s looking good. I wrote Smitten around 2006/07 when Irish summers hit their absolute nadir. I remember Kilkenny having 70 plus days of rain in a row from June to August in 2007 (I remember these things because the rain is my enemy) so I wrote what I knew of Kilkenny summers (a very rainy, sodden streetscape). So the play is still very rainy indeed so it may just look a little bit incongruous if performed in a sweltering hot Irish summer. I don’t care really, it’s a small trade off for a nice bit of sun. I guess we’ll just have to use make believe. 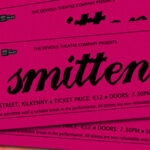 Next Story
Get Your Tickets!

One Reply to “They Call Them Remakes”