The Sword In The Stone

HomeDevious NewsThe Sword In The Stone 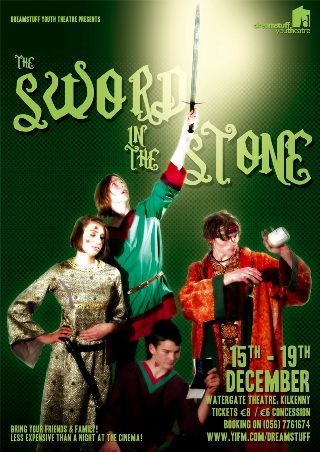 This year it’s a new comic reinvention of the classic Arthurian legend The Sword In The Stone. My own involvement in this is the pen, which is not mightier than the sword contrary to popular opinion. You’d probably just have your pen hand chopped off. This is the fifth play I’ve written on my lonesome for Dreamstuff Youth Theatre and the seventh overall that I’ve been involved in writing. But this one is different in that there’s a brand spanking new cast of young actors speaking the words and doing the awkward pauses and gratutitous fart gags.

This version reimagines Camelot as a dreary run down place full of disillusioned youth, ASBO’s and a poor tourist trade. An abandoned sword lies lodged in a stone where it is said that one day someone will pull it out and reign supreme as the King of Britain. But no one has. So on drudges life. Until two knights of the deceased monarch Uther Pendragon, decide to hold a joust to crown a new king and reinvigorate Camelot! And then things start to get interesting… and villains show up, including a certain Lady Of The Lake. The leads are reinvented as a surly, hormonal teenage bunch: Arthur is a bored, unmotivated school boy with ambitions to do… something. Merlin is a brainfried, potion experimenting wastrel. Lancelot is a dumb as a pancake, wannabe jock who proudly brandishes his provisional horse riding licence. And thrown into the mix is the new (and only) girl in town, Guinevere who attracts all sorts of unwanted, horny teenage boy attention.

Directed by the lovely Miss Angela Barrett who previously directed The Three Musketeers for Dreamstuff (our last collaboration as it turns out) this one has a strong cast of Kilkenny’s finest, funniest crop of new actors. So come along for a laugh and a chortle and support the youth theatre movement. And it’s a much more family friendly since they cut out all the drug and sex gags. I was writing ’em when I was 17 and I’ll be damned if I’m gonna stop now. (Plus the cast reliably informed me they’ll stick em all back in this week anyway)

The Sword In The Stone by Dreamstuff Youth Theatre opens up tomorrow night December 15th and runs until December 19th at 8pm nightly. Tickets are a recession busting 8 Euro with a 6 Euro concession and can be procured on 056 – 7761674. For more details check out www.yifm.com/dreaamstuff