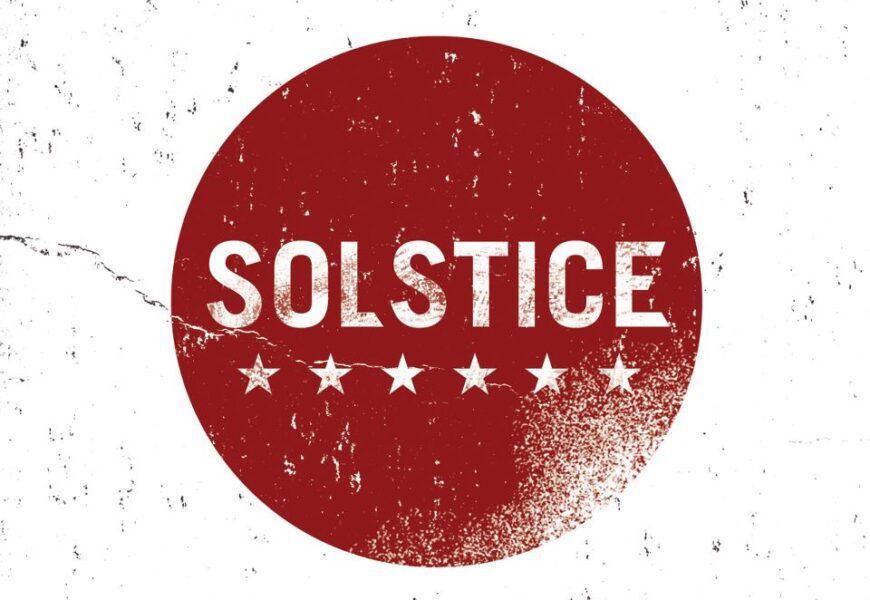 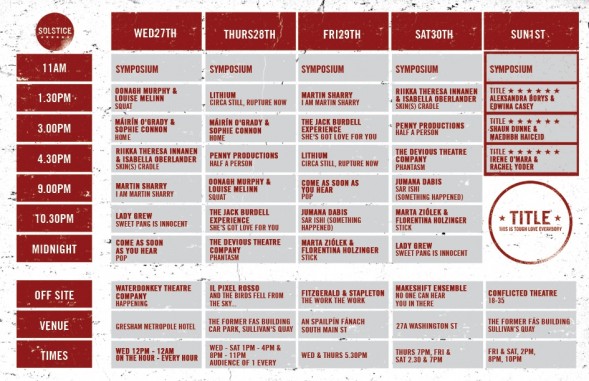 Our new show Phantasm is one about new perspectives and taking some pretty crazy trips. And in a way, it quite accurately sums up the Solstice experience.

We went down to Cork on a pretty crazy trip last year with 10 actors and 6 crew members to put on the biggest (and by biggest we mean longest) show that was staged during the inaugural festival. It was our first time performing last years production of Smitten and it proved to be a great opportunity to debut the show. We reblocked it to fit the playing area, made a lot of changings to the staging and did a few new things to make it very Solstice specific. As always, we had the fear debuting a new show but it went down a charm and whilst we felt it was a very rough and ready version of Smitten, it really seemed to suit the festival ethos. The audience were very laid back and many people came straight over to us for a chat after which was lovely.

Solstice is an experience we can’t recommend enough. It’s a multi disciplinary arts festival held during Cork Midsummer Festival. It showcases the work of a wide array of exciting young artists from Cork and all over Ireland. This years event takes place in the Elysian Tower as well as branching out to some off site locations this year. Solstice is curated by Dawn MacAllister, Eszter Neméthi, Ruairí Donovan and Shirley Somers who have done an amazing job in the past year of making it into a must see event and one of the most exciting parts of the Cork Midsummer programme. 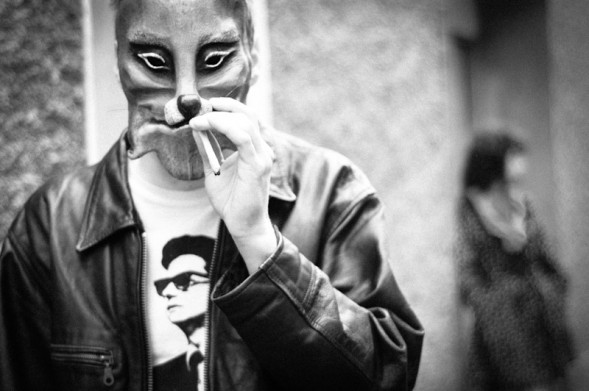 We’re really looking forward to taking Phantasm down there and letting it dip its toes into new waters. It’s the shortest piece of theatre we’ve made to date and one that provides a complete contrast from Night Of The Living Dead. John Kennedy proved himself to be a hugely talented young writer with Shifting in 2011 and Phantasm is another step forward for him. Described this past weekend by the Irish Independent as ‘an examination of the drug addled psyche of Leaving Cert students’, Phantasm tells the story of a night in the life of Frankie and Adam. Two Leaving Cert students who smoke a lot of weed and try to distract themselves from the pressures of emerging overground into life. Sometimes however, the distractions don’t work. Either do the drugs. Along with our young writer, we have two bright young actors in Hazel Doyle and Colin O’Brien playing Frankie and Adam, so this is definitely a more teen centric production than a lot of our previous work. Solstice puts a great emphasis on encouraging young audiences and giving opportunities to young artists and this is exactly the reason why we think it’s the perfect place to debut a fresh, new work by some of the younger members of our troupe. Or ‘pass Devious’ as they’ve taken to calling themselves.

One of the things we really loved about Solstice last year was getting to see work from other companies and artists and that’s something we’re even more psyched about this year. At present, we’re really excited about catching Lady Grew’s Sweet Pang Is Innocent, She’s Got Love For You by The Jack Burdell Experience, POP by Come As Soon As You Hear and Waterdonkey Theatre Company’s acclaimed Happening. Of course, there’s going to be plenty of things that you’re not expecting and we’re looking forward to being surprised and shocked and awed and getting a few curveballs to our expectancy.

We’re making the trip down today after a weekend of tech and dress rehearsals, with some of us trucking down from Dublin and some from Kilkenny. We’ll be teching in the Elysian this evening and then we’ll be seeing the sights and sounds of Solstice tomorrow. Phantasm opens at midnight on Thursday June 28th and will be followed up with a second performance at 4.30pm on Saturday June 30th. If you want to grab ticket, you can do it at  http://solsticecork.com/devious-theatre/

Now, if you’ll excuse us, we’re going on a trip! We hope to see you there! 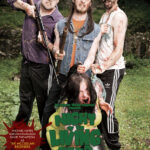 Next Story
Phantasm Is Happening