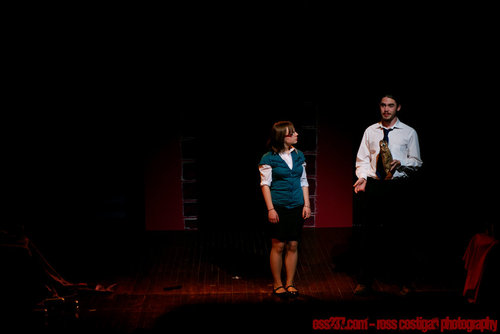 The following review was published in this week’s Munster Express and can also be found online here. Our thanks to Liam Murphy for his words and review of Smitten.

The Devious Theatre Company in Kilkenny have been earning themselves some welcome and very favourable attention for a young company doing edgy work like Cannibal The Musical! and Trainspotting at the Watergate Theatre, so it is only natural that they would take on a rite-of-passage youth story written by a member, John Morton. Putting it on at Barnstorm’s The Barn Theatre kept it low-key and low cost too and it was able to look at aspects of life for young people in Kilkenny in an edgy way.

Billed as a tragic-comic series of stories from Kilkenny City, these slices of life, on mostly rainy nights, had a youth theatre feel to them like Alcoholism, Pregnancy, Testicular Cancer, Career Choices and Doomed Relationships. Big themes that might have been heavy with issues and resolutions, but they chose a mix of styles, of tell the story and laid it out in any entertaining romcom way. The first half was mostly couples and hetro-metro sexuality and a large dash of expletives that fuelled nervous laughter. Characters stepped out of role to address the audience and there was a conscious homage to Conor McPherson, and his Seafarer, some cinema references and a Duelling Guitars sequence. The problems, so wittily explored in part one, were resolved cleverly, mostly in monologues in act two and John Morton showed his considerable writing skill in finding new wine from old bottles and with the help of a fine ensemble cast making scenes believable and just a little different.

So, you have a great night’s theatre, where you got involved in the lives of fresh characters, in maybe stereotypical situations but you were caught up in the rights-of-passage of characters, as well as the rite-of-passage of an exciting theatre company strutting their stuff and laying down a marker to be treated and funded as the next professional act in Kilkenny. Maybe they are the nucleus of a first professional company since Bickerstaffe.

John Morton is not only fine writer in a modern televisual style but he is a fine actor with his portrayal of a carpenter with his palms in bandages, who makes a wooden heart for his dream girl and saves the role from cliché. Colm Sheenan directed with flair and passion but too often set his characters in the same stage positions as if his audience was a camera in a studio.

Every member of the cast gave the audience a memorable moment and portrayed real people with some depth and honesty. I especially loved the work of Stephen Colfer as a pessimistic moaner, Maria Murray as an indecisive, spontaneous free spirit. Jack O’Leary looked like a character from Lost and he had a twinkle in his eye to die for. Ken McGuire does sleezeball charm like snakeoil and was indeed a right expletive deleted. Lynsey Moran made a boring character believable by playing it straight all the time. Suzanne O’Brien was exceptional as the goodtime party animal with a heart of tenderness. 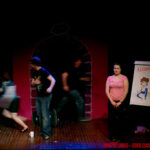 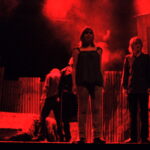