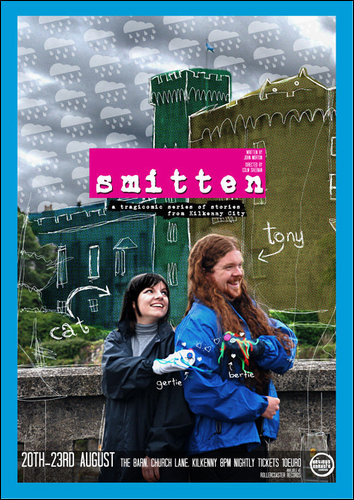 And off she went in a taxi somewhere. Which wasn’t the weirdest thing. She’s a lazy girl sometimes is Cat, that’s why she might get a taxi every so often. Out to her house when she was filled up with too much drink or she had been working all day, her legs hurting, all pretty and moaning and oftentimes, she was lazy and didn’t want to take the long stretch up the Waterford Road.

But the weirdest thing, Tony thought, wasn’t the taxi. Fuck the taxi! There was no sex eyes out of her. None at all. Ne’er a glance, a gaze, a gawp or the slightest look of intent. And there he was, wearing an uncreased shirt and a splash of some aftershave for once. How had she not noticed? Normally he’d have some old t-shirt on and his hair tied up and enough of a spray of Lynx on him that he wouldn’t smell offensive. Tonight he said he’d impress the tits off her with the sheer effort of a shirt and some of that Jean Paul Gaultier shit that Kev would often throw on. The bottle was the shape of a sailor and it all looked a bit gay for Tony’s taste but sweet lord did it smell good! Sweet Lord indeed. Tony Phelan isn’t in tonight girls, Mickey fucking Dazzler is on the prowl. His cock shaped compass didn’t even flirt with the other girls parading around, it just stuck straight for its familiar humping ground of Cat. And what with the effort he’d put in on the Mickey Dazzler front he reckoned it was fair to assume that they’d land on one or the others mattress tonight and wake up for breakfast the next morning. After all, hadn’t they being going out for 4 years and a couple of months and hadn’t they had an on/off thing going on for months upon months and more months upon that? Because there’s never a clean break is there? Always a relapse or a familiarity or sometimes, just sometimes when the time suits you and the drink has gotten hold of your melancholic parts, you’ll miss them. That’s what it’s like.

And that’s what Tony realised after precisely 4 pints of Heineken and a small whiskey chaser, he missed her. By fuck he did, and not ‘cos he was a bit merry, no! Because she’s a great girl, the greatest is his Cat. The only girl I’ve loved, Tony thought to himself. And why, oh why, can’t he make a proper man of himself and do the nice things for her? But sure, he reasoned, they’re not even going out anymore anyway. Not technically, and the arrangement must suit her too. That’s why she does it isn’t it?

And as predictable as the cuckoo popping from the clock, they’ll slope off before anyone notices and they’ll go home and they’ll kiss and they’ll cuddle and they do all the coupley things because they don’t know otherwise, they don’t know how to not do them. You get used to someone, don’t you? Anyone else is too much hard work aren’t they? When it comes to the sex, by fuck, he’ll slide in there with ease, as if he never left. It’ll be good too, the sex, because they know what to do for each other and she’ll know to breathe heavily into his ear and he’ll know to caress her smooth pale neck and then she’ll dig her nails into his lower back and she loves that thing when he kinda gyrates his hips as if he were doing the Hula, by fuck she loves that. And that’s what makes them great Tony thinks. Even if he does miss that look in her eye when he’s hammering away to the finish line. The look in her eye that says ‘This could be the last time. This should be the last time. Because there’s got to be something more than this. Something more than just trundling along.’ But Tony’s blown his load and rolled over and doesn’t care very much at all because he’s so out of breath.

So this familiar routine of comfort sex is what’s on poor old Tony’s mind as he sees Cat get into the taxi on her own across the road from the Pumphouse. The lights are dim on Parliament Street so he can’t really make out what she says to the taxi driver. But he can see the light on her phone hit the back of the seat and he knows, knows with all his heart, she’s texting someone new. It has to be at this time of the night! He knows because this isn’t part of the routine, the comfortable amble that relationships and familiarity often become. This is new terrain, rough terrain and Tony doesn’t have his bearings at all. Where’s Claire? Did Claire go home early? No, shit, she’s still inside Cleere’s building a pyramid out of Smithwicks beer mats with that cock eyed fuck she’s trying to make Kev jealous with. Dave is on his best so he’s taken Bronagh home early with a small bag of cans and a fish supper out of Joes. It’s not Aoife, that crazy fucker has some new bastard to rip the nuts out of. Come on Sherlock, who the fuck is it? It’s gotta be home? It has to be home hasn’t it? ‘Drive me up the Waterford Road there please, not too far, before the roundabout’ that’s what Cat will say. And the taxi driver will look at her and go ‘Jesus Christ almighty, what’s a cute little one like you with your shiny little black bob and your little white woolly hat and adorable button nose with the thick rimmed glasses perched on them and little green dress and black shoes and that black and white chequered coat that Tony likes so much, what’s a cute little one such as yourself doing going home alone of a Saturday night without himself?’ and Cat will say ‘Ah, I’m a bit tired and time of the month, you know yourself.’ And with that the taxi driver will give a curt nod of the head, rev her up and off they go, up Parliament Street and off out the Waterford Road. Hi ho Silver!

At least that’s what Tony hopes anyway. As the taxi pulls off the tits are frozen off him as his stomach churns a little with potential new truths. Part of him screams ‘There’s someone else and he’s not you! He’s nicer and thinner and doesn’t have wiry hair and has more than one pair of pants that fits him!’ and Tony says ‘Shut it you, shut your fuckin’ trap pal’ and the voice quietens down a little. Just a little. Tony turns to the small breeze and makes his way back towards Anna Conda with his head down. He wants to avoid making eye contact with anyone he knows and getting into some stupid drunken bit of shit talk. There was only one bit of eye contact he wanted tonight and he didn’t get it. ‘Some other lad is getting it! All the eye contact in the world! Her glasses are off and the sex eyes are all for him!’ screams the voice and Tony tells it to shut up, he’s trying to think of the sock puppets.

Aye, the sock puppets, what’ll become of them? The ones he made for him and her? Gertie and Bertie the most adorable sock puppets you could ever see. The one’s that Cat would press into his face from behind when he was struggling at the sink, trying to get the hard cheese off the lasagne dish. And now Gertie was gone. What’s to become of poor Bertie? He can’t go and just have a wank by himself can he? For a sock puppet can’t wank. Well, technically… no, no, that’s best not think about. No, what he’ll do is go back into the pub and sit down with Stevey who’ll still be moaning about that girl he fancies who he’ll never ask out and he’ll comfortably settle in and have himself another beer. And what he’ll do, yes, that’s it! What he’ll do is ring her house in about 20 minutes and see if she’s home and he’ll make out as if he was checking that she got home alright. All because of the abrupt way she left the pub without saying goodbye or giving the sex eyes or going home for the usual comfort ride.

So he sits down with Stevey and Stevey is moaning and complaining, especially about that Barnardo’s young one who’s got his goat in a big way. And so it goes, tick tock tick tock, all the minutes on the clock ticking as they go. And he throws his pint down him post haste and before Stevey’s even through telling Tony where he’d love to stick her clipboard with the pen hanging off it, Tony is up like a shot. ‘Right Stevey, I’m up to the bar, are ya having anything?’ Stevey examines his glass to clock his 3 minute progress since Tony sat down. ‘Ehhh… no Tony, I’m grand. Jesus, you really threw that pint down ya.’ ‘Sure did lad, sure did’ says Tony as he hops up off his seat and makes as if he’s up to the bar. But all he does is put his hand into his pocket to grab his phone and curse his nice ironed shirt and the nice smelling Jean Paul Gaultier shit because it didn’t work. Did it fuck. And out he goes and dials the Kitty Litter on his phone, as he’s named it. Oh he’s a funny one is our Tony and he smells great too! Like Jean Paul fucking Gaultier boy!

Ring…Ring…Ring… and answer! ‘Hello?’ ‘How’re ya Mick, it’s Tony here.’ ‘Tony. How’s it going?’ ‘Ah fine Mick, I’m just wondering if Catriona got home alright?’ Pause. Tony can just imagine Mick looking around the hall like an eejit trying to remember if his middle daughter came home yet. But Mick doesn’t take long. ‘No Tony, she said not to expect her home tonight.’ It’s not home Sherlock, your deductions are off. Not so elementary now is it lad? Not so elementary at all.

Tony can’t remember much else really. He ripped up a few beermats. He grunted a lot and said ‘Stop asking me if I’m alright for fucks sake, can’t ya see I’m fine!’ He threw down a few more pints. He moped home. He strummed his guitar a little. He played along to ‘Crying’ by Roy Orbison for a little bit. But what he can remember the most was staring and staring at those two sock puppets slipped onto either side of his bed posts and seeing that Gertie was turned away from Bertie, into the wall and he was looking right at her. ‘What’s the matter Gertie girl?’ Bertie seemed to be saying. But Gertie wasn’t giving him any attention. She was probably just thinking that Bertie needed a new hand in him.

Picture: Niamh Moroney and Jack O’Leary as Cat and Tony. 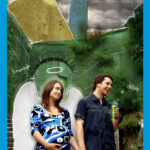 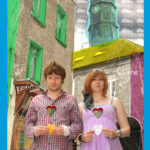 Next Story
Smitten – Kevin and Claire 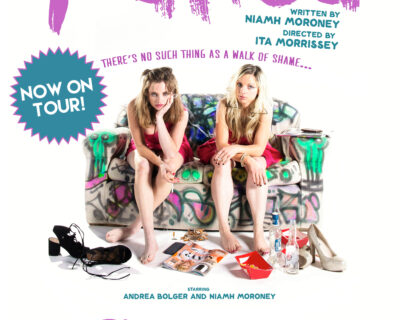 We’re going to Edinburgh! For the first time, we’ll be making a trip to the Edinburgh Fringe and we couldn’t be more...
Read More →