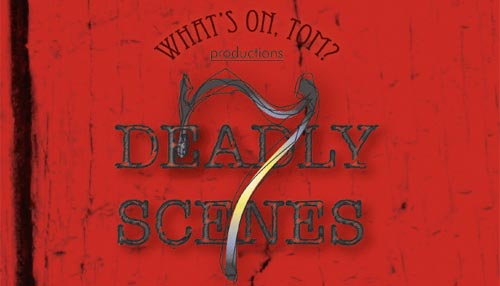 New local theatre group What’s On Tom are reviving their production of Seven Deadly Scenes this weekend with two performances in Kilkenny on Friday and Saturday night. The programme is made up of seven new short plays featuring some works from local writers including our own John Morton (writer Heart Shaped Vinyl, Smitten). You can read John’s own review of their first performance last November.

Having staged a three night run in Thomastown around two months ago, the group are taking their performance to the Set Theatre on John Street this Friday night, returning to the Bridgebrook Arms in Thomastown on Saturday night. Tickets for each night are available from their respective venues, priced €10.

Performed on the night are The Widow & The Bride by Hillary Gallagher, Waiting For Double O by Gillian Grattan, adele_edwards@slander.com by Alan Cliff, The Murder of My Mother by Hugh Cardiff, Lungfish by Dermot Corrigan, Dumped by Arnold Thomas Fanning and Tenterhooks by John Morton.

Performances each night start at 8pm and given that it’s a night off rehearsals for us, some of the cast and crew of Can’t Pay? Won’t Pay! will be taking in the shows as well. If you’re heading along on Friday night, we’ll see you there, and if you’re reading this and involved in any of the performances this weekend, best of luck from ourselves at DTC.