The latest in our increasingly frequent series of character introductions continues with Robbie and Billy, played by John Morton and Stephen Colfer.

Played by John Morton, Robbie is the fast talking, lady loving desperado of the stags. He’s obsessed with scoring on the stag night and with his brand new suit from Hepworths he reckons he’s looking well good. Except he’s increasingly got an air of slight desperation about him and the suit is well, kinda tacky. Maybe all the pints will help. John Morton has previously appeared with Devious Theatre in Heart Shaped Vinyl, Cannibal! The Musical, Trainspotting, Smitten and The War Of The Worlds.

Played by Stephen Colfer, Billy is the gormless, happy go lucky, shy lad of the stags. He’s got some weird ideas and isn’t exactly on the fast track when it comes to forward thinking. Easily influenced, Billy depends on Robbie and Kav to guide him through the rules of nightclub courtship. And on a messy night such as this, can Billy really fail? Stephen Colfer has previously appeared with Devious Theatre in Cannibal! The Musical, Trainspotting and Smitten. 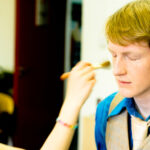 Next Story
Stags And Hens Trailer

One Reply to “Robbie and Billy”