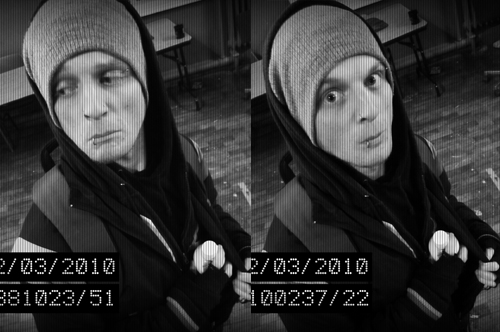 Ross Costigan previously appeared with us in Heart Shaped Vinyl, Cannibal! The Musical, Trainspotting, Smitten and The War Of The Worlds. He plays Luigi in Can’t Pay? Won’t Pay!

Why does every interview I do, start with questions about my hair?!

Okay, I’m not going to lie, this is probably my favourite character look so far, hair included. It’s better than the punk look, the cowboy look, the farm boy look and the ginger junkie look. I’ve got an Elvis-style-do, it’s pretty awesome!

So if you’re a fan of my hair or collect pop-out articles about my hair then you won’t want to miss this play… because of my hair!

Are we done with the hair now?

Luigi’s a nice guy although he’s not the brightest. He’s a newly-wed and I think he’s still getting used to being married. He relies on Giovanni for a lot of advice in the ways of women and the world in general. That’s not to say that he doesn’t have his own ideas, they tend to disagree on politics but he’s a bit naïve and tends to follow Giovanni in the end. I suppose he’s like a side-kick. Also he likes cowboy films and colouring books! Well… my version of the character does anyway. Colouring books are not mentioned in the script but I think Luigi likes them.

Going cold-turkey in Trainspotting was tough, there was a lot of dribble involved, some people still look at me funny in the street and think I’m a junkie! This is a lot more fun but just as challenging, the bigger the physicality the better but it can be hard not to worry that you’re overdoing it.  Hopefully people will look at me in the street after this and go “oh there’s that lad with the hair, he’s some lad for the massive physical comedy, he is!”

4. Can you give us five words you think describes the play?

There’s no nudity in it!?

5. What’s it like to play a married man? Does it make you want to get married? Right now?

I don’t think so, I’m a catch but I’m not really marriage material to be honest. Seriously, if you were a parent and your daughter brought me home, how would you react!? You’d be all like “oh jesus, she brought home that lad with the hair!”

6. Have you ever shoplifted? Honestly?

No. For some reason my general appearance tends to attract security guards. Every time I walk in to a shop, they follow me around. It means I never get the chance to steal anything. Although I’d probably make a good decoy if anybody is interested in setting up a partnership, just get in touch after the show.

7. Do you think the play is going to hit a nerve?

It might if loads of people decide to start shoplifting around the town! Then we’ll probably get the blame for it as usual. The authorities will be all like “oh it was them Devious lads and your man with the hair! They put everyone up to it!”.

Like that time we did Cannibal! The Musical and some idiot went around sticking animal organs on fences and everyone was like “oh it must have been them Devious lads and your man with the hair!” and all we were doing was singing about snowmen and eating each other!?

We might also offend the Italian community. You never know with them lads, one minute you’re ordering an onion ring and chip, the next minute you’re getting the kiss-of-death and sleeping with the fishes!? I know what you’re thinking but that’s not racist, I know how these things work. I did some character research before the show, went undercover working in a chipper as Luigi. It was mainly peeling spuds but every once in a while we’d whack a lad!

8. How about those unions eh?

9. What are your hopes for this production?

10. How are you finding orange dungarees?

I feel like a cross between a kids tv show presenter and a low budget horror movie psycho. And when we invaded the town in full costume and makeup on Saturday it was brought to my attention by several chav young ones that I have no ass in them! So my feelings on orange dungarees are pretty mixed I suppose!?

Can’t Pay? Won’t Pay! opens this Wednesday March 10th in Set Theatre, John Street, Kilkenny. It runs until Sunday March 14th at 8pm nightly. Tickets can be purchased in Rollercaster Records, Kieran Street, Set Theatre Box Office and bookings can be made on 056 – 7765133. For online bookings, please click the above link.