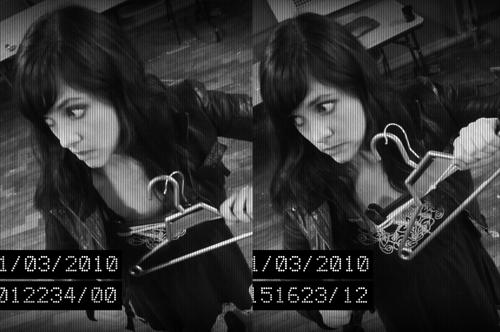 Hazel Fahy has previously appeared with us in Heart Shaped Vinyl and Cannibal! The Musical. She plays Margherita in Can’t Pay? Won’t Pay!

1. What’s been the most enjoyable thing about rehearsals? Being greeted with a cup of tea when you arrive and whatever tasty snack that’s on offer that day. Sometimes it might have been a slice of ginger cake or a cadburys chocolate finger. Other times a mini chocolate muffin. More recently a chocolate kimbererly. Oh and sorry..the chance to do some acting after being out of action for a long while.

2. Conversely, what’s the least enjoyable thing?
The last bite of Kimberely.. And being shouted at and beaten by John when he thought our acting was shite. He brought a big brown belt into rehearsals specifically. I think it has paid off though. Corporal punishment really does get results.
3. What appealed to you about playing Margherita?
The chance to play a part that wasn”t centered around being a bitch or a prostitute. It was a challenge but hopefully I managed it. Seriously though, i suppose  the thing that appealed to me most was the opportunity to play a really juicy role that involves a lot of physicality and pushed me out of my comfort zone. Playing a prostitute comes too easy to me. Playing a nice, naive, innocent pregnant girl..not so much.
4. If audiences get only one message from this play what should it be?
Rob stuff.
5. How have you found the commedia dell’arte style of playing?
Very challenging at first. Who knew acting like you’re pregnant with shopping could be so hard? I’ve never played a character like this before and I felt a bit nervous about it at the start, particularly the bits where I have to pretend to be giving birth to food. It also took me a while to really find the character of Margherita which sounds like a pouncy actor thing to say but it was true.  But after all the rehearsing and beatings I feel like I have really gotten into the part and i’m finding it really enjoyable losing my inhibitions.. and my olives. Suffice to say I AM MARGHERITA!
6. Have you ever shoplifted in your life?
Do one or two grapes count? Fizzy cola bottles in the pick and mix?
7. Hazel, five words that describe the play please?
Loud, ridiculous, loud, ridiculous, loud. (I’d pick ridiculous if I had a sixth word)
8. What’s it like playing pregnancy on stage? Are you really pregnant?
It’s fun.  Its given me an insight into the world of pregnancy. Not being able to sit down properly, stand up properly, turn sideways properly, turn around properly, basically not being able to operate on a basic level.  It does hide a big dinner tummy though which is handy.
About being pregnant in real life? I really really hope I’m not. I havent checked in a while though so for all I know I coud be. I hope I’m not tempting fate by playing a pregnant girl. I mean.. I dont even have a career. Im still renting! I’d have to move home again! What would my parents say??I havent even thought of any baby names! I havent bought any nappies! or done up the nursery!
9. What are you most looking forward to on production week?
The boys told me I’d have my pick of lads from being in a play. So that. (Sorry Danny)
10. Do you have the fear?
In the words of Lily Allen.. I’ve been taken over by the fear.
Can’t Pay? Won’t Pay! opens this Wednesday March 10th until Sunday March 14th at 8pm nightly in Set Theatre, John Street, Kilkenny.  Tickets can be bought in Rollercoaster Records, Kieran Street, SetTheatre Box Office and online at the above link.
(Visited 14 times, 1 visits today)