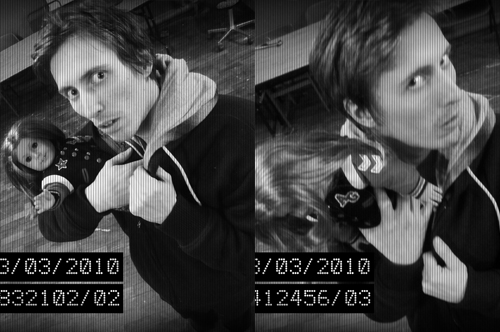 David Thompson last appeared for us as the Madman in Dario Fo’s Accidental Death Of An Anarchist. He previously appeared in Heart Shaped Vinyl, Cannibal! The Musical and The War Of The Worlds.

1. You’re back in a multi tasking role. Anything different this time?

2. What have you been doing to pull off multiple characters?

I haven’t used my real name in 7 weeks, I never wear the same outfit twice,  I sleep to a recording of the Origin of Species and spend my days in coffee shops trying to absorb the energies of those around me that I hope to embody. There’ll probably be a little bit of you in all my characters.

I think shoplifting is directly related to the surge of R ‘n’ B music. To both of them I am averse.

A Jay-Z record. Only to burn it and prevent further shoplifting.

Yes. . . I hope we never meet. Unless at an anti-shoplifting convention. Non-personal, y’know?

6. Do you have a new found respect for the police force?

I did until they stuck my head into a tree for making art. MAKING ART!!

7. If this play was 5 words what would they be?

I will fuck the horse….

8. What are you most looking forward to on the week of the show?

….wearing make up? Isn’t that…what all guys do plays for?…

9. What politician gets your goat?

All of them. They should never be seen by the public. Mystery will keep communism at bay.

10. What cracks you up in rehearsals?

When people fall over. No that’s everyday….I’m partial to freudian improvisation.