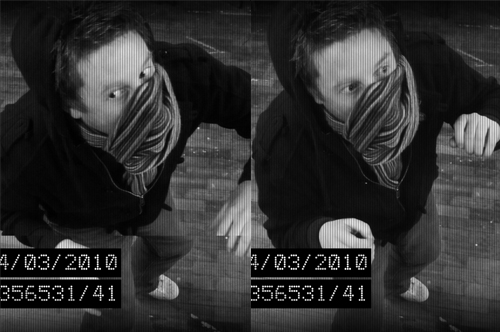 Ken McGuire has previously appeared in Devious Theatre’s productions of Heart Shaped Vinyl, Cannibal! The Musical, Trainspotting, Smitten, The War Of The Worlds, Shakespeare In Bits, Stags and Hens and Accidental Death Of An Anarchist. He plays Giovanni in Can’t Pay? Won’t Pay!

He’s a bastard. He comes home drunk, cheats on his wife, he’s communist, and I’ve got a sneaking suspicion that he has an eye for Luigi’s missus. That said, in a lot of ways we’re similar.

2. Has it been difficult to pick back up the physical style after Accidental Death Of An Anarchist?

I’d be lying if I said it wasn’t. Christmas ruined it for me. All those chocolates, drinks, beers, cocktails, crisps… I could barely pick up anything in January, never mind the physical style of Can’t Pay? Won’t Pay! But I tried these magic beans some ould lad was flogging on the main street, next thing you know I’m lifting cars, knocking over trees for sport, so I feel I could pick up anything. How you doin?

3.  Grand, thanks. So what have you found to be the biggest difference between the two plays?

The story. Otherwise they’d be the same play, wouldn’t they?

4. Have you ever shoplifted?

Me? A child of innocence! Not that I can recall anyway. Is it still shoplifting if the cashier undercharges you, or gives you back more change from the till than you had going in?

5. Do you think Ireland could do with the self reduction movement?

It could do with a kick in the arse to be honest, whatever about self reduction. We’ve been going through a rude awakening over the last 18 months. I’m delighted that the word “recession” hasn’t been bandied around the news much of late, I figure people are sick of hearing it anyway. I don’t think I’d agree with the whole self reduction movement
though. Unless Ireland had a dedicated Apple store. The one in the north is too far north.

Accidental Death Of An Anarchist.

7. Would you rob from the rich to give to the poor?

My middle name ain’t Robin Hood for nothin’. It’s actually James. Took Robert for the confirmation so I’m kinda have way there. Just doesn’t have the same ring to it though.

8. What politician would you most like to hang out to dry?

Jesus, where do you start? I’d take them all, well, most of them anyway, and pack them off on some island. I’d possibly start with that Kenny fella. Though I’ve a feeling I’d be waiting in line yet.

Try me again on opening night. Though fear in that instance turns to adrenaline. The rush of the opening night of Accidental Death was one of the best I’ve felt over the last few years of Devious production and if things go according to plan, Can’t Pay? Won’t Pay! is gonna top that ten fold. Of course, I should really get around to reading my
script…

10. What’s your favourite line in the play?

Well, as of last week it became “when a man and a woman love each other”, one of Giovanni’s mutterings. Favourite would be the exchange between Giovanni and Luigi in the closing scene. Don’t think I’ve had to play a character before who delivers the line “Get the fuck off me ya cunt” with so much affection. Though that might not – technically –
be in the script.