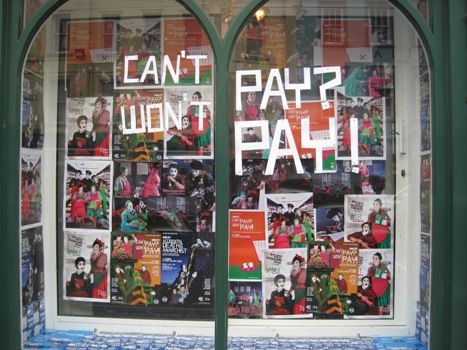 We’ve been upping the promotional stakes this week as we’re now exactly a week off the opening of Can’t Pay? Won’t Pay!

As you can see above, we completed a fairly elaborate window display yesterday in the window of St. Canice’s Credit Union on High Street, Kilkenny. What we’re really hoping is that it will stay intact for the entire week and not fall apart on us… it’s happened before. Blu tac everything heavily! 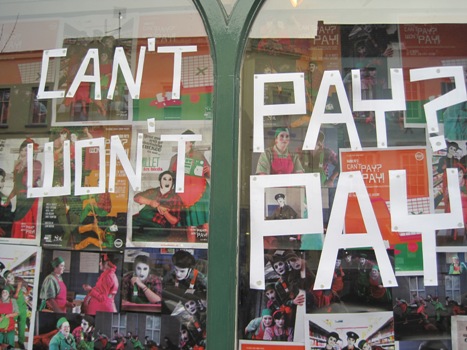 Also, our first major press interview hits the stands today with myself, Hazel and Angela interviewed by Tess Felder in today’s edition of the Kilkenny People. So please, check it out. I’m sure you’ll find us witty, articulate and way less rambling than we were at the interview. Thanks Tess!

We’ll also be hitting the streets of Kilkenny this weekend. So if you’re scared of people in white facepaint running around interacting with you, maybe give our city streets a miss this Saturday afternoon. There’ll be shoplifting women, sneaky men and pursuing guards all running around. Keep an eye out!

To round off our PR onslaught, Ken, Ross and Dave will be hitting Edwina Grace’s show on KCLR next Tuesday afternoon to chat about the play and perform an excerpt from the production using their very best voice acting.

So it’s all kicking off here in Devious Towers* as we march towards opening night. If you haven’t already booked your tickets you can do so at tickets.devioustheatre.com, Rollercoaster Records, Kieran Street and Set Theatre Box Office which can be contacted at 056 – 7765133.  Roll up! Roll up!

*Devious Towers doesn’t actually exist. We wish it did though. And had ensuite bathrooms.