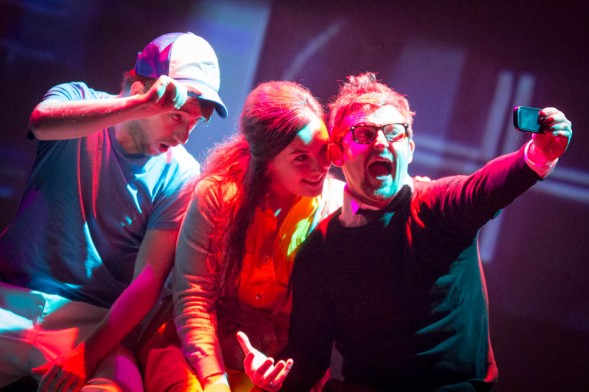 Daisy is an unwitting internet celebrity, the ‘Psycho Chugger’ whose video currently sits on 178, 234 YouTube views. And it’s ruining her life. Alan is the one who made it. A blogger who goes by the name of Generalissimo Malaise, he targets the ‘everyday arsehole’. Chris is a homeless man and just got caught in the crossfire of their feud. War Of Attrition is about a nasty game of one-upmanship that descends into a relentless war. There will be casualties.

War Of Attrition debuted at Dublin Fringe Festival in September 2013, receiving 4 star reviews from The Irish Times and Irish Theatre Magazine. It subsequently played The Watergate Theatre, Kilkenny and Galway Theatre Festival in October 2013. The show was originally developed during our In The Future When All’s Well residency in Kilkenny Arts Office in 2011. It had a rehearsed reading as part of Play On at the Dublin Theatre Festival in 2012. The show received a nomination for Roseanna Purcell in the Best Female Performer category at the Fringe Awards in 2013. It was revived for a run in Project Arts Centre, Dublin in December 2014. Reviews and comments on the show can be read right here. 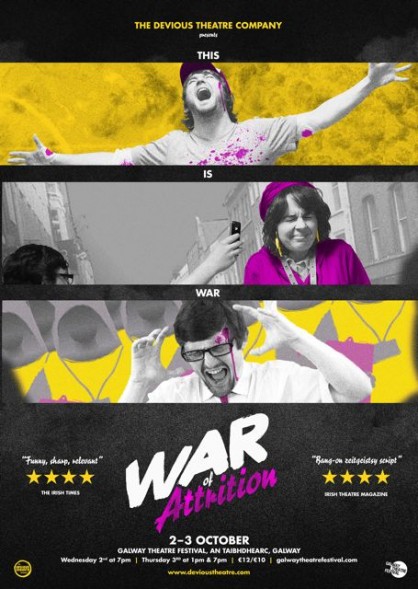 “An Easter Rising / Wikileaks mash up … the bang-on zeitgeistsy script is backed up by excellent use of live technology, and a completely believable spiralling chain of events.” – Susan Conley, Irish Theatre Magazine