Home Devious Shows & Past ProductionsNight Of The Living Dead (2012) 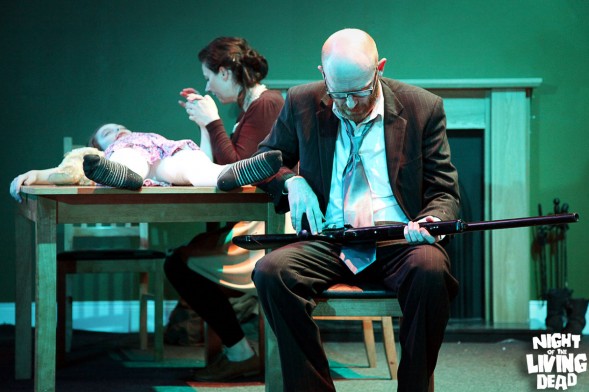 Babs is bloodied, frantic and looking for refuge. She has just watched a man attack her brother as they visited their parent’s grave. Fleeing from the snarling, growling man, she makes a break through the countryside, seeking refuge. As darkness falls, she arrives on a ghost estate on the outskirts of her hometown, looking for a house her friend claims he’s in hiding out at. She arrives at the house to discover it has been boarded up. She manages to enter through the unlocked back door, only to find the house ransacked with traces of a bloody struggle evident. She has no other options. This is her only refuge. But she’s not alone…

Ireland is dying and dying fast. Airports are shut down. Ports are overcrowded. Roads are in gridlock. We are in the thick of a crisis. Media outlets are reporting a strong influenza outbreak but details remain sketchy. However, social media sites like Facebook and Twitter have more graphic accounts of bodies returning to life and attacking the living. Hospitals are overcrowded with sick, dying people. Phone networks begin to crash. Shops are looted. Panic is widespread. Able-bodied young people are emigrating in droves. Their elders are barely surviving, just waiting and watching as things go from bad to worse. Families are falling apart. No homes, no money, no prospects: ripped apart as units and if they’re really unlucky, limb from limb. The undead are the only ones rallying together in this country. And soon there’s going to be more of them than there are us…

We performed the Irish stage premiere of Night Of The Living Dead from July 24th – 28th 2012 in The Watergate Theatre, Kilkenny. The play was adapted by John Morton and Connie Walsh from George A. Romero and John A. Russo’s original screenplay. The production was directed by John Morton and produced by Ken McGuire. 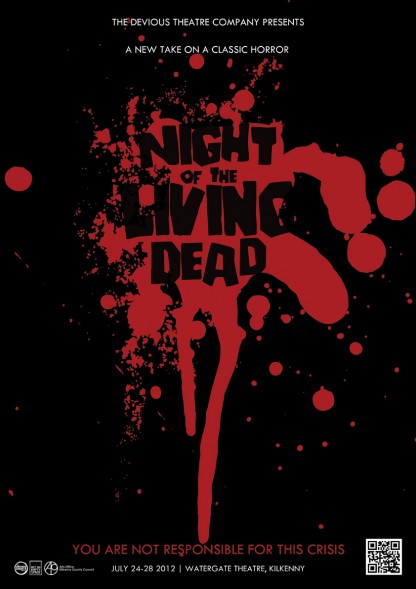