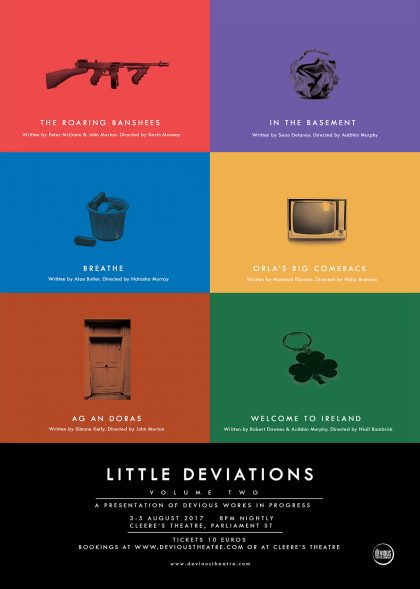 Little Deviations is the name we’ve given to our rough and ready showcase of new works in development. Volume 1 took place in August 2013. Volume 2 took place from 3rd to 5th August in Cleere’s Theatre, Kilkenny as part of Alternative Kilkenny Arts. It featured work in progress showings of six new plays.

Orla’s life has been governed by Ireland AM for too long. 2,730 hours too long in fact but who’s counting? Orla, an ambitious journalism graduate, feels trapped by the hours that she has spent watching Ireland AM with her twin sister Dee, an Ireland AM super fan with severe health problems. However, the show Orla once resented so intently becomes a source of inspiration and solace to her when she is forced to stake out her own independence.

Hugh really wants to be poet. However, he is inescapably and tediously bad at it. In frustration with his own shortcomings Hugh decides to look at all his favourite writers and see what they have in common; what is the special formula for brilliance? What he finds is tragedy, death, sexual escapades, and general debauchery… all of which he is going to try in the name of finding the Muses.

Emily never thought she’d end up here, being interviewed by the hospital’s psychiatrist. But this is where she is and its what she needs to do. The stories she will tell and hear will shape her. From where she came from to where she’s going. Five women, five stories. What do you do, when you can’t keep going?

Ireland, 1923. After a failed assassination attempt on Eamon De Valera, a rogue unit of Cumann na mBan flee to prohibition era Chicago where they set up a poitin bootlegging operation. Soon they are embroiled in a violent turf war with Al Capone’s Outfit. So begins the tale of The Roaring Banshees…

Front Of House by Orla McGovern