The Barn Owl Players Are Goin’ Out West 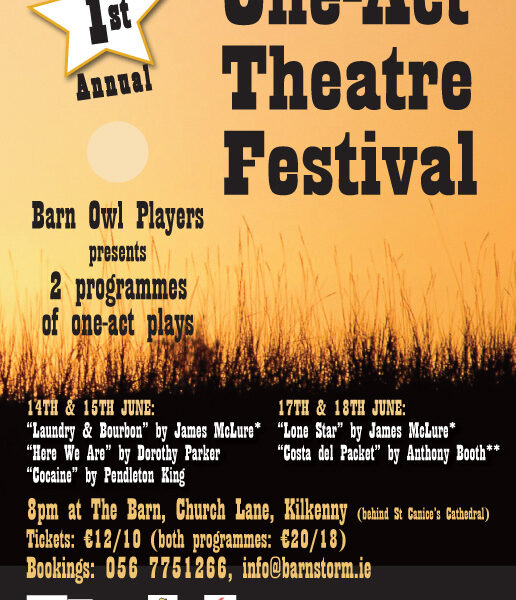 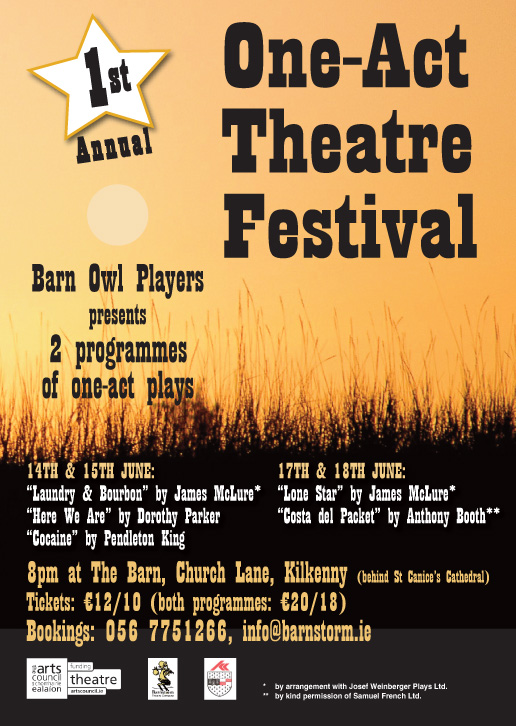 The Barn Owl Players are opening their account for 2010 with a hugely novel idea that should prove to be one of the theatre highlights of the year in Kilkenny.

As if we aren’t full to the brim of quality festivals already, next week will see a one act theatre festival taking place for the very first time in The Barn. The group will be presenting five one act plays over the space of four days. One programme of events will take place on June 14th and 15th and there will be a follow up programme on June 17th and 18th. The centrepiece(s) of the festival will be the performance on two companion plays by the American playwright James McLure. Laundry and Bourbon features a female ensemble cast with Lone Star featuring an all male cast. Both plays explore the lives of 3 couples in a deep Texan backwater town. The cast for Laundry and Bourbon features Janis Woodgate, Trisha Hogan and Eithne O’Reilly. The men making up the cast for Lone Star are Jim Carroll, Michael Somers and John Whitely. Both of these plays are directed by the artistic director of Barnstorm, Philip Hardy.

The other two plays you’ll see in the first half of the festival are Here We Are, directed by Sheila Kirby and starring Nicola Keating and Willie Ryan. The final performance will be Cocaine, directed by Willie Ryan and starring Laura Keys and Hughie Glynn. The second programme will additionally feature Costa Del Packet, directed by Trish Brennan and featuring a very strong (and highly journalistic) female ensemble cast of Naoise Coogan, Mary Cody, Ita Morrissey, Sinead Goggin and Nuala Roche.

The Barn Owl Players have been performing a highly eclectic and varied series of productions since they were formed in 2007 under the banner of Barnstorm Theatre Company. With a strong ensemble troupe of 26 members they are also the largest team of actors working in Kilkenny City at present. Their plays usually sell out very quickly so you’d be well advised to secure tickets for the One Act Theatre Festival quick as you can. Both programmes will take place in The Barn, Church Lane, Kilkenny. Tickets are 12/10 Euro for one performance but €18/20 for the two programmes, they can be booked on 056 – 7751266 or at info@barnstorm.com