Here’s an introduction to the next 4 cast members from our new comedy Shifting by John Kennedy.

In this poster we meet the following characters (l-r):

Amy, the birthday girl herself, all time sweetheart and keeper of immaculate carpets played by Alex Christle.

All of these actors are making their acting debuts for Devious Theatre. Alex has previously worked as our stage manager on both Can’t Pay? Won’t Pay! and Scratcher and we’re delighted to see her line out for an acting role. John Kennedy is the same John Kennedy who wrote this play and has proved a fine hand at double duty these past few months. Jessica Walsh previously recorded a haunting version of The Smiths ‘There Is A Light That Never Goes Out’ which soundtracked our production of Trainspotting.We’re delighted to have all 4 of them joining the company.

Shifting opens on 18th of April and runs until April 23rd. Tickets are currently onsale here at No. 76 John Street, online here or else bookings can be made on 056 – 7794138. Tickets for Monday night are only €5 and can only be bought from No. 76. 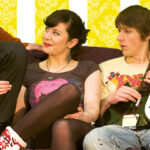 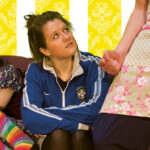