There’s a great buzz in Kilkenny’s theatre community at present so we’re sharing some love and spreading some word about a lot of the good things that are happening at the close of the year.

While we’ve been plugging The Barn Owls recent production of The Whiteheaded Boy in Kilkenny, Dreamstuff’s second coming of The Life of Brian, another production we should give mention to is Lost Weekend by Kilkenny-based playwright Gillian Grattan.

Myself (Ken), John and Ross met up with Gillian over the summer to chat about the theatre we want to make in Kilkenny and we are delighted to see her production of The Lost Weekend take to the stage this week.

In her own words…

Lost Weekend was written by Gilian Grattan, and is the story of Vanessa and Harry, a married couple who are having a weekend away… from each other. Vanessa is heading up to Nothern Ireland with her annoying sister Violet on a hen weekend. Harry is counting the hours to her departure. In fact he just can’t wait to see the back of her so he can get stuck into a wild weekend in her absence. Lost Weekend is the story of what Harry and Vanessa get up to while they’re apart. Apart from the two main characters, the two actors play all of the other characters that Harry and Vanessa meet along the way.

Lost Weekend opened last night (Wednesday) in Cleere’s Theatre, Kilkenny and runs to this Saturday. There will be a one-night-only performance at the Bridgebrook Arms in Thomastown on Sunday December 14th. Tickets are available from the respective venues, priced €10.

The Devious Theatre Company wish Gillian, the cast and crew of Lost Weekend all the best and we’ll be along ourselves to see the show before the weekend is out. It’s a good time to be making theatre in Kilkenny!

Congratulations too to Dreamstuff Youth Theatre who opened their second production of The Life of Brian early this week. I went along on Tuesday for the opening night and immediately found myself running scenes in my head from our own production seven years ago. The stage version stands the test of time and if you’re looking for entertainment this weekend, get yourself to the Watergate Theatre where tickets for ‘Brian are only €10! 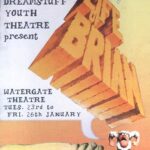 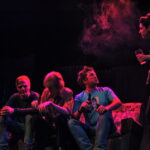 Next Story
‘Trainspotting’ – The Opening Scene