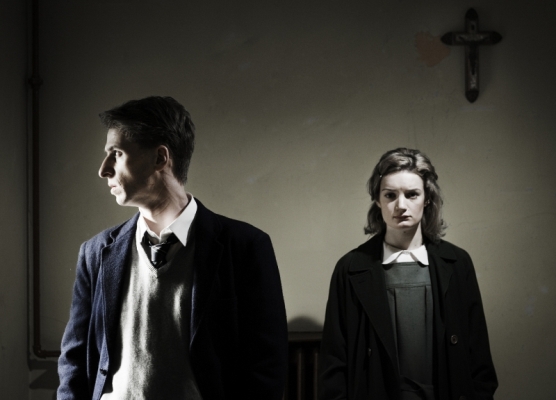 It’s not often that a Kilkenny based play by a Kilkenny playwright hits the national stage but that’s exactly what’s happening this week with the opening of Thomas Kilroy’s Christ Deliver Us! in The Abbey Theatre. In fact, I got a letter from the Abbey Theatre only 3 weeks ago informing me that a Kilkenny writer was being performed on the Abbey stage so what better reason for me to go and visit the national theatre? Bang on. It’s nice to see how geographically on the ball the Abbey’s mailing list is!

Kilroy was born in Callan, Co. Kilkenny in 1934 and has written many popular plays including The Death And Resurrection Of Mr. Roche, Talbot’s Box and Tea and Sex and Shakespeare. He gave a fantastic talk last August in conversation with Fintan O’Toole as part of the Kilkenny Arts Festival. Amongst other topics, Kilroy talked at length about the themes he would be covering in this play. And now, 7 months on, it’s arrived under the direction of Wayne Jordan with expectations riding high. The fantastic ensemble cast features such notables as Aaron Monaghan (tutoring one of the upcoming Artlinks workshops), Eamonn Owens, Laurence Kinlan, Tom Hickey, Peter Hanly, Michael McElhatton, Cathy Belton and Kilkenny native Seamus Brennan.

His latest play is a reworking of German playwight Frank Wedekind’s 1891 classic Spring Awakening and depicts the trials and tribulations of growing up in provincial 1950’s Ireland, a place ruled with an iron fist by the Catholic Church.

The play opened this week and has already received some fantastic reviews, mostly notably from Peter Crawley of The Irish Times, in a review that can be read here.

Christ Deliver Us! runs in the Abbey Theatre until March 13th.

← Previous Story
Writing For Stage & Screen at the National Library
→ Next Story
Mmmmm…. Millet For Birds!