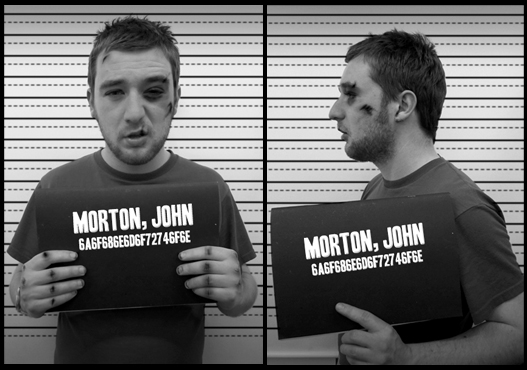 John’s been interrogating the cast for the week but today I’d my chance to corner the director himself and turn the tables on him to throw a few questions his way.

Describe your part or role in Accidental Death Of An Anarchist?

I play Inspector Bertozzo. He’s a fairly hapless, short tempered copper who tends to get the shit kicked out of him. A lot. (Ken’s note: There’s no word of a lie in that, I’ve actually nailed him in the head and connected some fantastic kicks in rehearsals. He is the director after all)

What’s been your favourite part of rehearsals?

What’s the hardest thing about rehearsals?

Trying to maintain eye contact with David Thompson.
.
What do you think of the Set Theatre?

I think it’s a beautiful venue and the audience are going to be very comfortable. But it’s Fort Knox like in it’s ability to enter or exit. Every day is like the opening titles from Get Smart.

How do you think the audience are going to respond to the play?

One part of me really hopes people get offended. But most of me wants them to laugh their arses off. As long as they’re not bored. So yeah, somewhere between throwing rotten veg and pissing the seats. A mess, basically.

Describe the play in 5 words.

Accidental Death Of An Anarchist

How relevant is the play to Ireland at the moment?

Corrupt guards, insane people running the show, paedophile priests, ruthless journalists, the truth being taken out back and shot. Yup, once we get Jedward and floods in there we’ll be laughing.

What are you most looking forward to during the run of the show?

People’s reactions to David Thompson’s marathon performance and Ken McGuire and Alan Butler’s taches. Pretty hot shit all round if I do say so myself.

Without them I’d be nervous.

Finally, who would you most like to take into a police cell and beat the shit out of.

Thierry Henry. We’ll leave it there so.