Before we became our own company, we started off doing plays with Dreamstuff Youth Theatre here in Kilkenny.  Back in 2006, it was far from youths that we were so we felt that we needed to branch out and do our own thing. 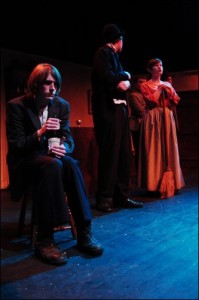 But one of the main reasons we set up Devious Theatre was because the hunger, excitement and passion for theatre which we experienced with Dreamstuff just didn’t seem to exist elsewhere in Kilkenny. And it was this love of the theatre that had been drilled into us in our youthful years. 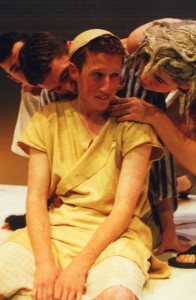 Dreamstuff Youth Theatre was set up by Mike Kelly of Young Irish Film Makers in September 2000 and kicked off with a really exciting production of Monty Python’s The Life Of Brian. It’s hard to qualify how exciting a prospect this was at the time. I grew up in a Kilkenny where there was no scope for acting as a teenager and no school drama system in place. If you wanted to do anything on stage it would have to be a musical and well, some of us just don’t have the Gene Kelly genes!

For hundreds of Kilkenny youths (ourselves included) Dreamstuff Youth Theatre has provided us with a theatrical education and allowed us to immerse ourselves in a whole world of plays and gave us plenty to do in the dark school evenings of our youths. We were introduced to a whole range of plays, writers, styles and all the innerworkings of theatre making. Hell, some of us even made it our jobs. Now, as it reaches its tenth year an entire programme of exciting theatre has been launched and it all kicks off this Saturday night with a one night only fundraiser that’s entitled, yes! Dreamstuff 10. 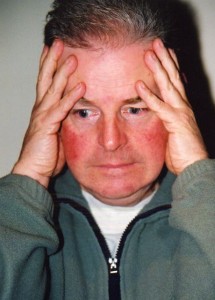 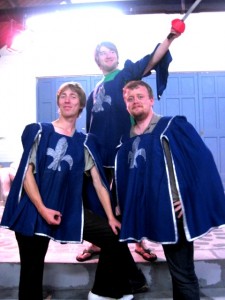 Averaging 2 plays a year since kicking off in September 2000, Dreamstuff have just started rehearsing their 20th production. The 20 plays that will get an airing tomorrow night are The Life Of Brian, A Midsummer Night’s Dream, Treasure Island, The Shaughraun, Robin Hood, The Government Inspector, Sherlock Holmes and the Cult Of Dracula, Romeo and Juliet, Grimm’s Fairytales, Macbeth, The Three Musketeers, The Colleen Bawn, Around The World In 80 Days, The Rise Of Zorro, Wyrd Sisters, The Life Of Brian: The Second Coming, The Playboy Of The Western World, The Sword In The Stone, The Mouse That Roared and Andersen’s Fairytales.

The last of which is the newest Dreamstuff play which won’t hit the Watergate stage until this December. It’s a sort of sequel to 2004’s Grimm Fairytales and features more fairytale madness, this time through the eyes of the great scribe Hans Christian Andersen. 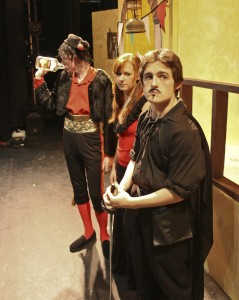 The show is literally one night only and will not be seen… ever again! So get along and catch the funniest retrospective that you’ll see all this year. Kick off is at 8pm in the Watergate Theatre, Parliament Street and tickets are 10 Euro with all proceeds going to Dreamstuff Youth Theatre. There will also be a tenth anniversary commemorative Dreamstuff programme on sale at the door and again, all proceeds will go to Dreamstuff’s 10th year of productions.

All information on the group can be found at yifm.com/dreamstuff