If you’ve been following the Devious Theatre Twitter stream over the past week or two, you’ll have noticed an increase in the Stags and Hens related tweets including some last-minute shots from the final rehearsal in The Barn here, here and here.

We’ll be covering the “get in” stage at the theatre tomorrow (Sunday), maybe a little live video, some more photos, that kind of thing. But for those of you on Twitter, we’ll be using the #stagsandhens hash tag so you can get all your updates in the one spot. (See here on Twitter search).

In other Stags and Hens related news, last night was indeed the final night of our residency in The Barn, the playing space owned and operated by Barnstorm Theatre in Kilkenny who have been incredibly generous to us over the past three years. Just after John’s post hit the blog on Thursday, we managed to get the set transported to The Barn for two days of raw rehearsal, initial set up, getting actors used to the actual set before moving it to the Watergate Theatre tomorrow. The set itself will look great. Thom and Frank (Dowling) have done a great job in getting it together based of Kev and Eddie’s designs (Devious Theatre Construction Inc) and in contrast to previous productions, it’s been great to have the set for a few days before the dress and tech rehearsal, something we’ve not been able to do before. It also means that we get to give cast and crew a day off (today). It’s been an action-packed two weeks of solid rehearsal, some going into the wee hours. There’s been highs, lows, more highs, laughs, strong words, sneaky pizza runs so when it comes around to Saturday, it’s nice knowing that you’ve got a day to put your feet up.

Because it all kicks off tomorrow. Come 10am we move into the Watergate Theatre for a week’s residency – set moves in, early rehearsal, evening tech, repeat and flourish on Monday. We’re pretty much ready to kick this night off and we hope you’ll be there to see us! Stags and Hens opens this coming Tuesday night at the Watergate Theatre and yes, tickets are on sale. They can be purchased for the recession busting price of €12 (one of the most affordable productions for it’s size in the theatre this season) from the Watergate box office or by phoning 056 7761674.

If you’re following us on Twitter, you’ll have a chance to bag yourself a pair of tickets for the final night of the play as well. Just add @devioustheatre to your friends and keep an eye out for the question! 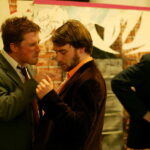 Next Story
Taking It To The Theatre

One Reply to “Church On Time”