It’s hard to believe that we’re nearly 2 months into production on Accidental Death Of An Anarchist and this is the first time I’ve gotten to write anything. So much for regular blogging. I’m kind of hoping to do another few of these in the next week or two just to give an insight into what we’ve been tinkering away at in the lab for the past few months.  Between the production for this, Shakespeare In Bits and all the pre-production for Can’t Pay? Won’t Pay! it’s been a busy, busy time here in Devious towers.

I guess the main thing to talk about is the play itself. Those 53, battered, higlighted and scribbled pages of Dario Fo’s writing that lie on my desk are the reason we pursued this one. It’s always been one of my favourite plays and everyone in Devious had long harboured hopes to do it.

And with the opening of the Set Theatre, we figured the time was right. The venue itself is good for getting up close with an audience and the closer you can get, the more effective the tension and claustrophobia on the stage can be. In a bigger venue, we were afraid that the production would lose it’s impact.

Dario Fo’s writings have consistently been tools that have poked and prodded corrupt institutions, not just in Italy, but all around the world. And the great man himself has encouraged the interpretation and adaptation of his work to suit the climate of whatever country you’re in. The Alan Cumming/Tim Supple version in 1990 took aim at the corruption in the British police around the time of the Birmingham Six and Guilford Four acquittals. Performances have taken place in communist China, Pinochet’s Chile, the former West Germany, Ceausescu’s Romania (three seperate companies were running productions in three seperate cities in 1983) and apartheid ridden South Africa. It’s a play that resonates anywhere there’s corruption and anywhere that citizens have been oppressed. When it came to our version, myself Ken and Kevin sat down with the text to hammer out some ideas and get an idea of how it was going to work within the Irish milieu.  If we’d been doing this play 8 years ago it would have been perfect, but since then our Garda Siochana have shaped up (and stopped battering students) so we kinda felt that we might be stretching for a target.  So with the text, we brought the target more inline with the government and especially how they utilise the guards and the relationship between government and police force. And that’s where we hit our jackpot of material. With the Shell To Sea campaign still making the news consistently and little incidents where the guards have been used to go after government antagonisers (hello nudie Brian Cowen pictures) we’re confident we’ve got enough ammo. Not to mention the fact that our current minister for Justice, Equality and Law Reform, Dermot Ahern is on record for a whole bunch of homphobic comments he has yet to retract, and well, we’ve got plenty of material here for some sacred cow butchering political satire.

This is definitely a political farce but it’s also a broad comedy and in adapting it we’ve made sure that we wouldn’t lose the laughs amidst the satire. And indeed, vice versa, with another worry being losing sight of our targets as we tried to play up the funnys. Hopefully we’ve got a good mix of the two in here. We’ve kept the beautiful wordplay of Fo’s language and in some cases have added in new bits along those lines. Also, because of the injection of Irishness, we’ve given the text some of our own flavours and yes, maybe a slight hint of gombeenism on the part of some of our police characters. It’s interesting how natural lies and manipulations of the truth sound coming out of these characters when they have Irish accents. If anything, I’m aiming for the look and feel of a Marx Brothers comedy. With lashings of satire.  And a tad more Irishness.

So all in all, we’re hoping it works and we can enrage and enlight and humour in equal measure. Basically, we’re hoping Dario Fo would approve! Hopefully in the next few days I’ll get to write a bit about the rehearsals and some other aspects of the production. We’re 2 weeks off opening so god knows it’s going to go as quick as the past 2 months have. But hey, that’s the magic of theatre, it’s all about the moment! 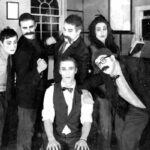 Next Story
Chasing The Madman

One Reply to “Fitting The Crime”