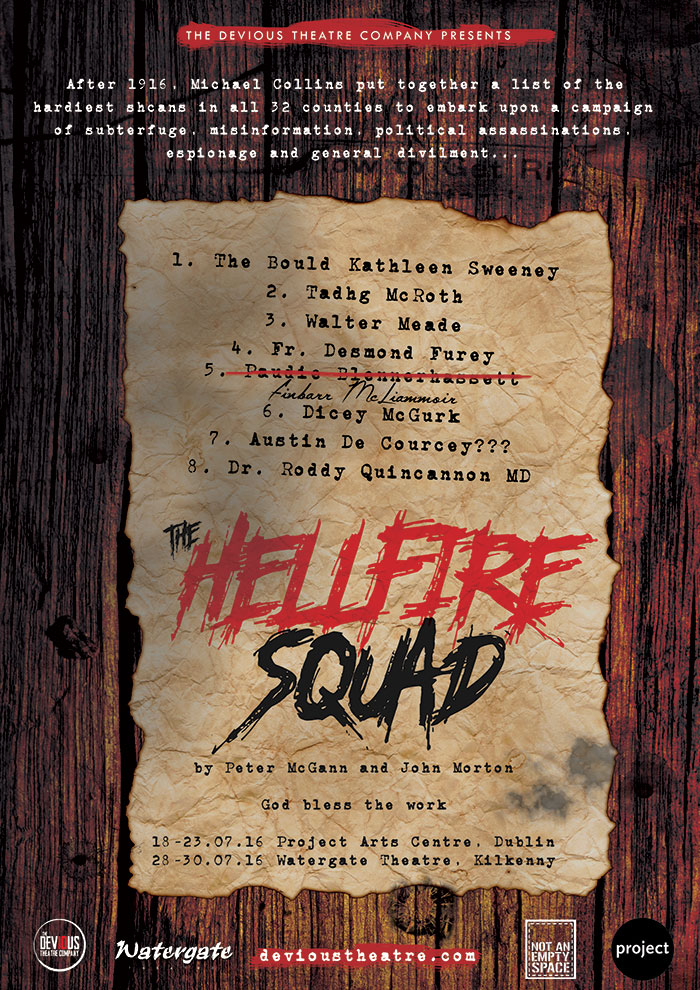 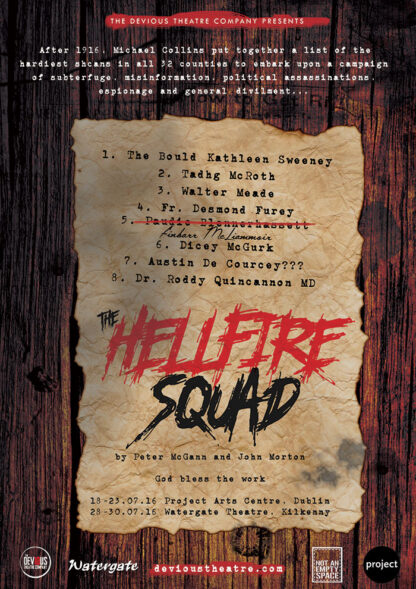 “From the ruins of the G.P.O. they came. By design they were to be anonymous, unheard of, unseen. Their purpose was clear: to move like ghosts through the streets of Dublin and put the fear of God in the occupying forces. I saw it first hand. The Squad. Collins’ chosen ones. The Apostles. But that’s not what I knew them men as. To me they were born from ashes and forever more cloaked in hellfire. Don’t be lurking in those shadows… come out to us now…” – The Bould Kathleen Sweeney

So begins the tale of the Squad. The next preview of our Devious 10 stock is the rip roaring, hell blazing yarn that is The Hellfire Squad, which will be our second release this year when it lands this summer.

Written by Peter McGann and John Morton, the play is a riotous, men on a mission, action comedy exploring the origins of the hit squad assembled by Michael Collins in the aftermath of the 1916 Rising. The infamous squad Collins created have never been the focus of a dramatic narrative until now, despite being an integral part of his legend. The Hellfire Squad looks at the impact this secret band of assassins made on Irish history in contrast to the secretive nature of their roles. The resultant story is a tightly woven journey, primarily fiercely comical, but just as powerful, tragic and frightening as the history it sprung from. The production will be directed by Sarah Baxter and produced by Ken McGuire. It opens in Project Arts Centre, Dublin where it will play from July 18th-23rd before hitting our hometown of Kilkenny where it will play The Watergate Theatre as part of this years AKA programme from July 28th-30th. It was previously presented in work in progress form as part of Little Deviations: Volume 1 in August 2013. 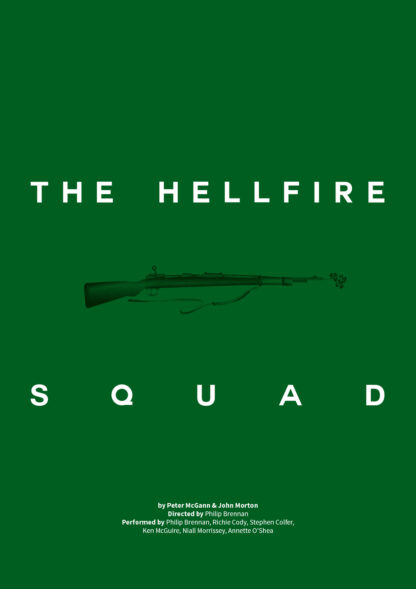 The creative squad working on it thus far are:

Peter McGann (Co-Writer): This is Peter’s first written work for the stage. His previous work has been for screen including the short films The Eyeball Waltz, Go West and Nugent. He is currently one of the writers of Republic Of Telly. He was also one of the makers of Vultures and has also acted in numerous films and TV shows over the years including Smitten, Hot Water Bottle, Daffney Molloy And Other Catastrophes and Swerve for Mycrofilms in Kilkenny.

John Morton (Co-Writer): John’s last written work for Devious Theatre was War Of Attrition which premiered in 2013 at Dublin Fringe Festival. Previous Devious Theatre plays include Scratcher, Smitten and his first play, and our next production, Heart Shaped Vinyl. His last play Taboo was presented by White Label in The New Theatre this past February. He was also the writer of community theatre project Bridge Street Will Be in 2015. Co-writes include Night Of The Living Dead and The War Of The Worlds.

Ken McGuire (Producer): A founding member of Devious Theatre, Ken has previously produced many of our shows including The Union, War Of Attrition, Bash, Night Of The Living Dead, Smitten, Shifting, Scratcher, Dario Fo Season and Stags and Hens. Directing work for us includes Cannibal! The Musical (with Kevin Mooney), The War Of The Worlds and iphigenia in orem as part of Bash.

The eight strong cast are currently being shrouded in secrecy so we won’t be announcing them just yet but when we do, we’ll be striking from the shadows.

This is the first period piece we’ve done since Cannibal! The Musical (although we probably should count Heart Shaped Vinyl in that number) and we’re very excited to tackle Irish history for the first time. This is our contribution to the centenary celebrations for 1916 and takes a skewed perspective on the events of the time, focusing on a group intent on achieving the infamy and burgeoning myth of the Easter Rising martyrs. It’s a mish mash of styles and genres but when pressed, we’ve mostly been calling it a Western. Here’s a look at some of the inspirations we’ve had on the go throughout the development of the show. 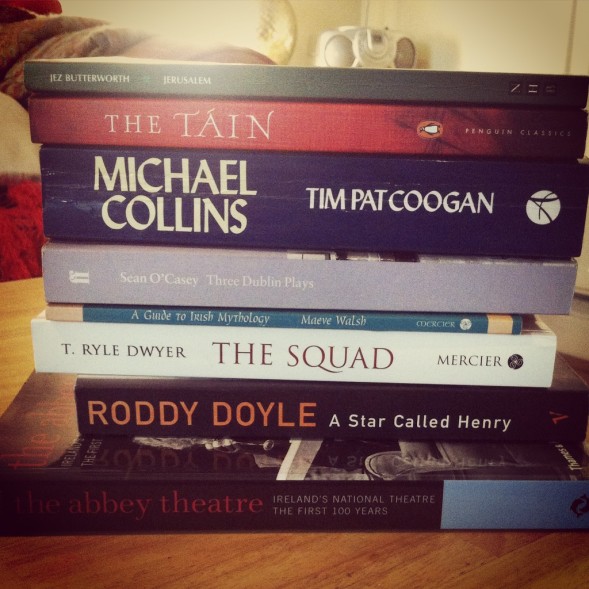 A terrible bastard will be born. The Hellfire Squad lands this July and tickets will be going on sale soon. We’ll also be launching a Fund It campaign to support the show so please keep an eye out for that.