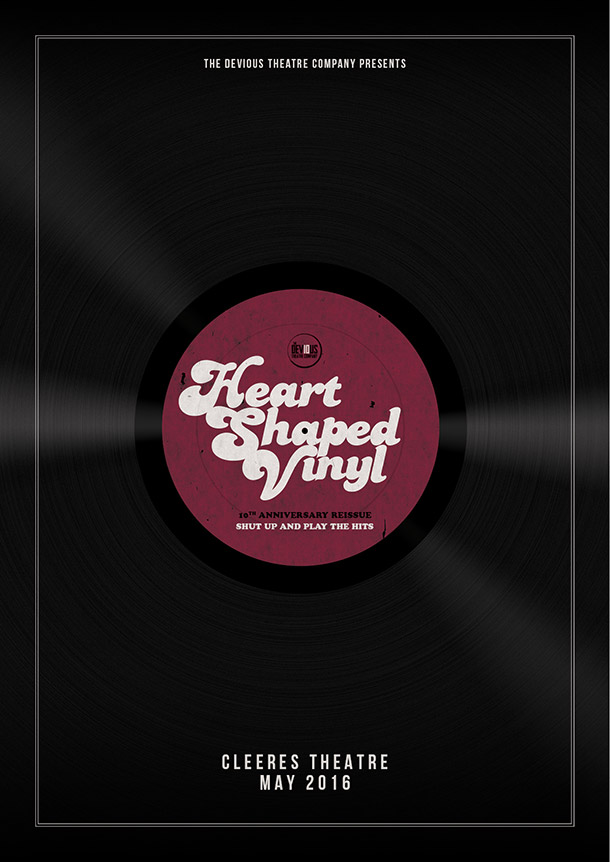 In a quick and surprising turn of events, Devious Theatre turn 10 years old in May 2016. That came around fast! To celebrate a decade of theatre, we’re lining up a big, celebratory programme for the year entitled, quite simply, Devious 10. And here’s our first announcement!

We’ll be kicking off our 10th anniversary programme off with a reissue of our first production Heart Shaped Vinyl.

First performed in Cleeres Theatre in August 2006, we’ll be returning to our spiritual home for a two week run of our critically acclaimed debut. Heart Shaped Vinyl is a theatrical mix tape focusing on pop music, relationships and a whole lot of heartbreak in Ireland over the course of six decades. Originally set between 1962 and 2006, this new version adds a brand new story set in the years 2014 and 2016. The play is broken into Side A and Side B, both of which tell a different side of six different stories featuring an ensemble cast of 14 actors.

Heart Shaped Vinyl is the first play written by John Morton and was originally staged three times by Devious Theatre, in August 2006, June 2007 and October 2007. It has been hugely popular on the student drama circuit and has been presented in over ten different productions in the last decade. All previous productions of the play have sold out and for this one off commemorative edition, we expect tickets to be snapped up in advance. Tickets have now gone on sale and can be booked here. If you buy your tickets before Christmas, use the code DEVIOUS10 to get them for only €10.

Heart Shaped Vinyl will crank up its jukebox in Cleeres Theatre, Kilkenny for eight performances only from 18th-21st and 25th-28th May 2016. The rest of our Devious 10 programme will be launched in the new year. For more details, keep an eye on this here website.

Props to Paddy Dunne, who designed the very first Heart Shaped Vinyl teaser in 2006 and who delivered another cracker here for the reissue.