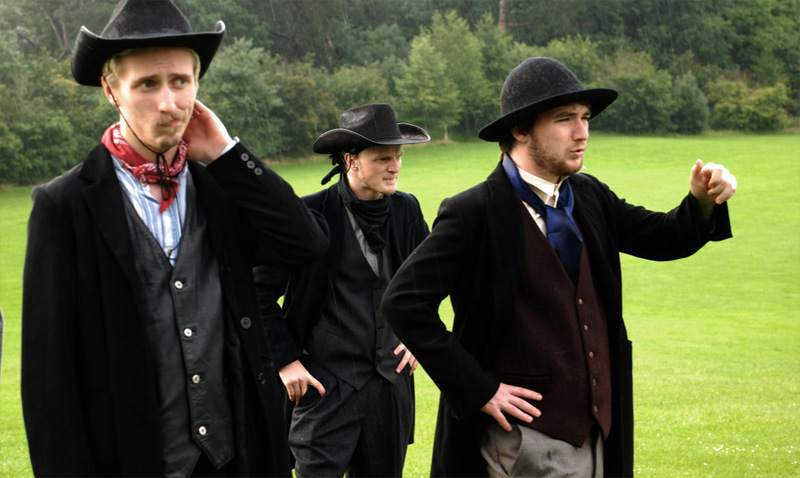 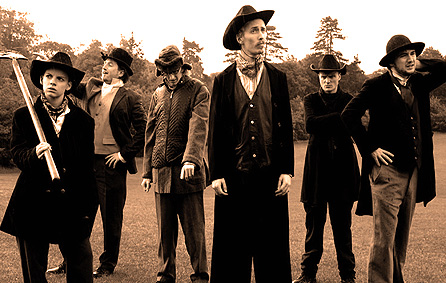 We braved the torrential rain and thunder that Kilkenny has had all day long to take to the Castle Park earlier this evening (while still raining) to get some outdoor shots we can use for the press, press packs and web site. It was nice to get the night off rehearsals and tackle something totally different as the six miners organised initial costumes loaded into Ken’s van (Swan) and Thompson’s car (Packer) and made a beeline for the park, getting in amongst the tourists, dog walkers, joggers and anyone silly enough to brave the rain. What looked like a cross between a cowboy wedding and a scene out of Deadwood or Back To The Future 3 marked a crazy evening in the Cannibal rehearsal calendar.

The following is an extract from Ross’s staff blog (Ross plays Frank Miller) on KilkennyMusic.com.

This evening we were fitted with our various costumes to do the first of many Cannibal promo shoots. The six hopeless miners pictured above; Niamh Moroney, Ken McGuire, Stephen Colfer, Dave Thompson, myself and John Morton headed to the Castle Park with Paddy Dunne and Kevin Mooney to do the shoot. It was far from a “shpadoinkle day” with the rain pouring down but that didn’t stop us.

You wouldn’t believe the looks we got from tourists, passers-by and park security when the six us walked up the parade looking like extras from Deadwood.As we posed for various different shots in the park a large group of men were jogging around, we think they might have been a soccer team training. As they passed, we smiled, tweaked our cowboy hats and said “howdy.” We were met with nothing but frowns and curious looks. I’m sorry but even though we were dressed as cowboys, I still think it’s weirder for 20 guys to put on really small shorts and go run around together in the rain!?

All of the promo shots will now be worked on by Mr Paddy Dunne before becoming part of the ’severed hand’ packs. There’s still plenty more shoots to come with the whores and the trappers plus the Cannibal poster.

Get the low down on tonight’s activity in full and see what else Ross, Niamh, Kevin and Thompson have been up to in preparation for Cannibal by reading Ross’ staff blog.

Many more tasty updates to come your way. Get your napkins at the ready! 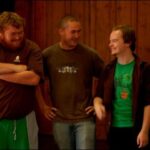 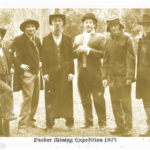 Next Story
The Packer Mining Expedition