Day 7: Teaching The Trappers To Dance 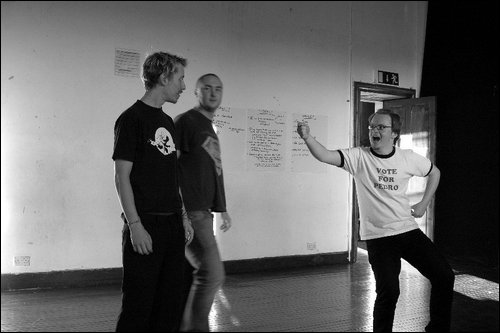 So, day 7 of rehearsals has passed us by and we finally got to work with Sean (as Crazy Old Ralph) and do a little more work on the blocking of interactions between the miners and whores precamp and at the camp.

A highlight of a slightly rushed night would be the start of a dance routine for Loutzenheiser and Nutter. While we got to spend some extra time on the Trappers song tonight, including some fight choreography, you couldn’t help but smile in the rehearsal hall as you watch the two trappers twist, jump, sing and chime in behind Paddy Dunne (as Frenchy Cabazon).

We had been hoping to work in some of the music with our MD Kevin Reade tonight but its not to be as he’s away in London for the week but we’ll get to that next week. As it is, we’ve got a photoshoot scheduled for tomorrow evening (Tuesday) where hopefully the rain will hold up and allow us the time to shoot some material for the press packs we’re releasing. It brings a whole new meaning to the phrase “handle with care” 🙂