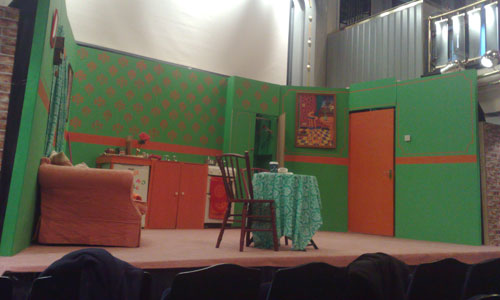 OPENING NIGHT for the show has come and gone and at time of writing we’ve got Steven sweeping the stage, Angela being tended to by Louise (makeup), the cast are in the green room costuming up and I (Ken) get to sit in the theatre and reflect on last night’s performance, with just over two hours to go to tonight’s.

So how did it go? From an actor’s perspective it went very well. The reactions from the audience were nothing short of fantastic (and thank you all to those who were at last night’s show). From the opening of the first act through flying doors, flying mustaches, millet soup, burst bags of pasta, exploding clocks and all the way to the rousing conclusion of the show, we couldn’t have asked for a better opening and, looking back on last night, I don’t think we could have anticipated it either.

Taking off the acting hat and switching on the producer’s hat, it was great to see last night take to the stage, then take off altogether. Front of house, back stage, makeup, costumes, sound, lights and more, everyone is packing their A-game for the week and that’s what we’re looking to deliver on all fronts.

The show has indeed opened, no blood this time (Accidental Death of an Anarchist did genuinely see glass smash and blood spill on the opening night) and we’ve got four more to go.

This is our first major production for 2010 and the conclusion of our Dario Fo season of works so we’d love to have you along. There are tickets available for each night (though by the sounds of things if you’re looking for tickets on Friday or Saturday, advance demand is quite high) and they can be booked by calling 056-7765133 (Langtons), dropping into Rollercoaster Records on Kieran Street in Kilkenny or you can order and print your tickets online here.

I mentioned on my own blog earlier that there is indeed free wifi available in Set Theatre so if you’re tweeting during the show or throwing anything out online, why not use the #cpwp tag to keep track of everything?

Note: For security purposes we’ve replaced the name of our makeup artist with “Louise”. Errr… yeah.