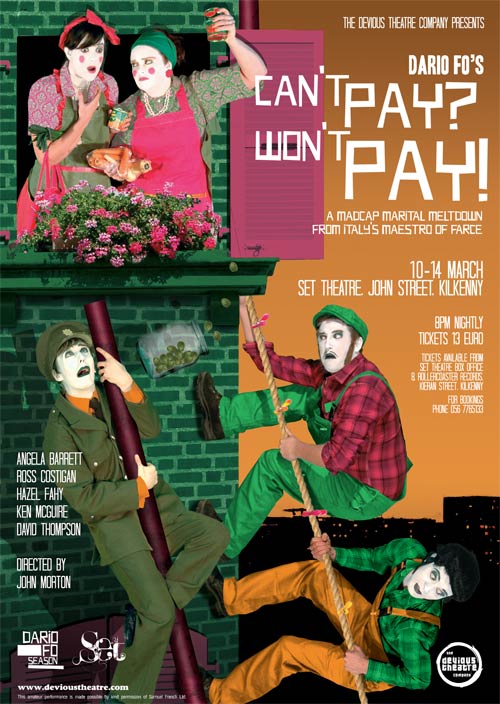 We’re exactly one month away from our opening night of Dario Fo’s Can’t Pay? Won’t Pay! and as we edge ever closer here’s the first peek at our cast in all their Technicolour glory! This will be the second part of our Dario Fo Season which last December saw us bring Accidental Death Of An Anarchist to the stage at Set Theatre in Kilkenny. Can’t Pay? Won’t Pay! is a madcap marital meltdown from Italy’s master of farce. Can’t Pay? Won’t Pay! was written by the Nobel Prize winning playwright in 1974, inspired by the self reduction movement which saw working class Italian women take what they wanted from supermarkets, only paying what they could afford. Another of his trademark political farces, Can’t Pay? Won’t Pay saw Fo tackling issues of inflation, unemployment, workers’ strikes and the unions, once more tied up in the framework of a wild, slapstick comedy.

Following on from our teaser, this latest poster has the entire cast present: Housewives Antonia and Margherita (Angela Barrett, Hazel Fahy) stand in a window frame, desperately attempting to rid themselves of some stolen groceries. Unbeknown to them, a police Sergeant (David Thompson) has scaled a quite unsafe and unsteady drainpipe as a hail of carrots, tin cans and olives rain down. Meanwhile, husbands to the housewives, Giovanni and Luigi (Ken McGuire, Ross Costigan) scale a broken washing line in an effort to aid in the commotion.

Can’t Pay? Won’t Pay! will run from Wednesday 10 March to Sunday 14 March and tickets currently available from the Set Theatre box office in Langtons in John Street and Rollercoaster Records in Kieran Street. Tickets are also available to purchase online at tickets.devioustheatre.com For all details on the play and the full Dario Fo Season, stay tuned to this here website…

← Previous Story
Get ‘Em While They’re Hot!
→ Next Story
Can’t Pay? Won’t Pay! Step 2: Mix It All Together