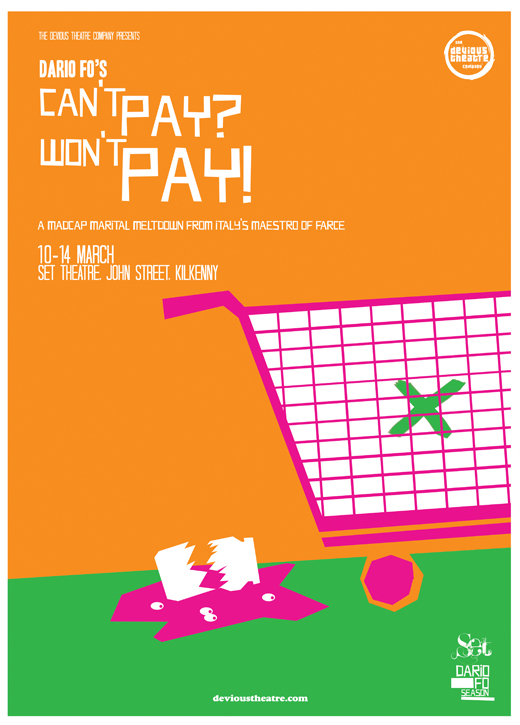 A happy new year to all from us here at Devious Theatre! And with the advent of 2010 comes the announcement of our first production of the year.

After the success of Accidental Death Of An Anarchist in December we are following it up with the next part of our Dario Fo Season, Can’t Pay? Won’t Pay!

Can’t Pay? Won’t Pay! was written by the Nobel Prize winning playwright in 1974 after he became inspired by the self reduction movement which saw working class Italian women take what they wanted from supermarkets only paying what they could afford. Another one of his trademark political farces, this play saw Fo tackling issues of inflation, unemployment, worker’s strikes and the unions, once more tied up in the framework of a wild, slapstick comedy.

Can’t Pay? Won’t Pay! tells the story of two working class women, Antonia and Margherita, who are frustrated by rising prices and struggling to make ends meet. Along with the other women in their neighbourhood, they decide to rebel against the cost of living by taking goods without paying. However, hiding the shoplifting spree from their husbands and the pursuing authorities might prove a little trickier than expected.

The cast that we’ve got together for this production is fantastic and as solid a troupe of actors as we’ve ever had. Angela Barrett, one of the founding members of Devious Theatre, is taking on the role of Antonia, the first time she’s going to take to the stage for us. Hazel Fahy (Heart Shaped Vinyl, Cannibal! The Musical) will be playing the perpetually harassed Margherita. The only cast member returning from Accidental Death Of An Anarchist will be the ubiquitous Ken McGuire as Antonia’s stubborn loudmouthed husband Giovanni. Ross Costigan (Trainspotting, Smitten, Cannibal! The Musical) plays Luigi, Margherita’s husband in revolt. Rounding off the cast in a variety of parts that would make Peter Sellers double take is Paul Young (Stags and Hens, Trainspotting). After directing Accidental Death Of An Anarchist I’m delighted to be taking the reins on the next part of our Dario Fo Season and I’m relishing the challenges that the next few weeks are going to throw up. It’s a great play, a great cast and we’ve got a great team working on it so I’m more than confident that we can surpass the standard set by our last foray into the work of Mr. Dario Fo.

Like our production of Accidental Death Of An Anarchist, we’ll be exploring the themes of Can’t Pay? Won’t Pay! through the prism of modern Irish life, drawing on the themes of unemployment, strikes and the dire situations this country seems to find itself in on a weekly basis. Again, there’s more than enough material to work from and we’ll be keeping very much in the anarchic, satirical spirit of all of Dario Fo’s plays. Also, this is the first time we’re producing a play which has previously played in Kilkenny before, following on from a highly regarded production by the New Theatre Group which played in the Friary Hall in 1992.

This madcap marital meltdown from Italy’s maestro of farce will, like its predecessor, hit the stage of the Set Theatre, John Street, Kilkenny between Wednesday March 10th and Sunday March 14th at 8pm nightly.

Tickets have gone on sale and are available online only for the moment. Tickets will be released to physical outlets within the next week.

Over the next few weeks we’ll be blogging the production on this site with insights into all aspects of production and a few other interesting tidbits besides. So please, do stay tuned!