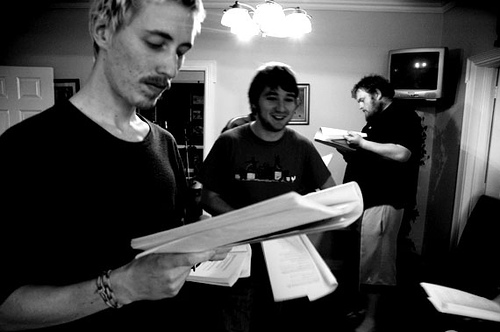 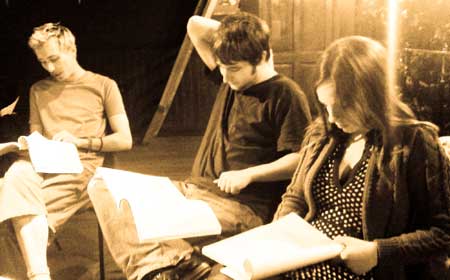 It’s only been four days since Heart Shaped Vinyl closed and already we’re in full swing for rehearsals. We’re going to be keeping tabs on the Cannibal development through the site here, running it as a good ole fashioned blog to keep you folks up to date.

Its myself (Ken) and Kevin directing the show and it was great to see things kick off last night. Sure enough, we had a full cast meeting and initial read-through before Heart Shaped Vinyl took to the stage but last night was the first proper rehearsal for the show and it wasn’t too bad at all. We managed to bag Cleere’s for a rehearsal (we’re hopping between any venue we can for a week or two) and the six of us playing the miners (myself, David Thompson, John Morton, Stephen Colfer, Ross Costigan and Niamh Moroney) enjoyed a read through of ten scenes or so, before taking to the stage and plotting out some early blocking. And singing. And dancing.

Notes were taken, rushed stage diagrams jotted down but the buzz and laughter between the six of us (and Kevin) was great, so natural. I think the energy is carrying over well from Heart Shaped Vinyl, creating a non-stop summer of theatre for us and hopefully it will lead right through Cannibal.

Rehearsals continue this week with the miners and trappers meeting tonight while all other characters meet on Thursday for the last of this week’s rehearsals. Cannibal! The Musical itself will run in The Watergate Theatre, Kilkenny, from August 22nd to August 25th. Tickets are available now by phoning the box office on +353 56 7761674 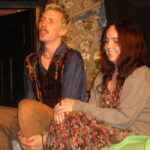 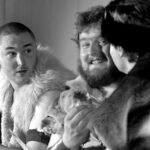 One Reply to “Cannibal Screams To Life”