And that’s probably why we love Neil LaBute. He was one of the writers who was on our mind when we formed the company in 2006. We would sit outside the Marble City Tea Rooms (and then the Coffee Club when it got colder) and we would spitball about theatre and we would pass around plays and get ourselves excited about the potential of what we could do. Neil LaBute was one of those writers who got us excited. We nearly did The Shape Of Things a couple of times (could still happen). At one point we talked about doing Fat Pig and reasons to be pretty in tandem, like a ‘Neil LaBute Season’. And of course, there was always bash. That was ‘the best one’ we felt. It was just gut wrenchingly powerful. It still is. It was absolutely shocking and fiercely uncomfortable. And I think that’s why we  loved his work in general. We formed a theatre company in Kilkenny when there was no company that did work that we wanted to see. We were effectively creating the theatre company we wanted to see. We wanted to bait and provoke and gut punch and engage. We wanted to make people laugh and cry. We wanted it to be a communal experience. So we’ve spent five years doing plays that provoke and prod and get the audience involved, we’ve done things to challenge ourselves, challenge the perceptions of what we can do and burst open that box that you get put in whether it be ‘regional company’ or ‘young lads’ or ‘shock theatre’. We take delight in being really fucking cheeky with our work. And that’s why Neil LaBute spoke to us. Because that’s the kind of work he does. So after years of talking about his plays, we’ve now got to the point where we’re opening one tomorrow night. It’s exciting to finally get to this point. We’ve now chalked LaBute down, much like we did with Dario Fo previously. There are others too, but hopefully they’ll come in time.

bash lives and breathes by its audience. The final part of what LaBute calls ‘the triangle’ along with text and performer. And we hope the audiences will come to see bash when it opens tomorrow night. And we hope they get their hands dirty. We’ll leave you with a quote from a 2008 interview with Neil LaBute. One that pretty succintly sums up why we wanted to do this play:

‘So go back to the theatre, audience members everywhere, and get your hands dirty. Sit closer than you usually do. Smell the actors and make eye contact and let a little blood splash on your hem. Give the musicals a break for a while: those bastards are rich enough. Let us know that if we are brave enough to write about the stuff that matters, then you’ll come and watch. I may never fight a battle, or run for office, or help an old lady across the street – but when I sit down and put pen to paper, I can promise to write about a subject of some importance, and to do so with honesty and courage. The time for fear and complacency is past. Bravery needs to make a comeback on both sides of the footlights, and fast.’

bash: latterday plays by Neil LaBute opens tomorrow night in Cleeres Theatre at 8pm. It runs until Saturday October 22nd. Tickets can be booked in Cleeres on 056 – 7762573, bought at the venue or bought online here. 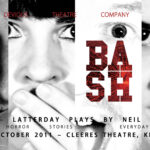 Previous Story
Are You Ready To Listen?
→ 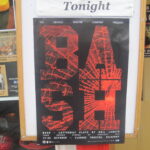 Next Story
Getting This Bash Started