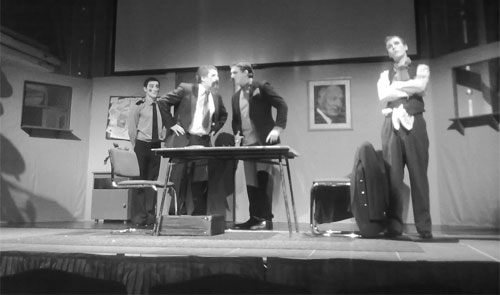 So, we’ve finally done it.

We’ve gone and opened our latest show, Dario Fo’s Accidental Death Of An Anarchist, at the Set Theatre in Kilkenny. We opened last night which means today, we’re a little bit more relaxed.

I’ve never seen a group of people try to do so much in one day as we did yesterday to get the show open, between moving the set back into the theatre, re-lighting, finalising props, costumes, decorating and dressing, makeup – the whole nine yards. We’d been flat out for about 10 hours straight, getting a breather at 7:40 to open the doors, finish makeup and finally put the show to the public.

And that’s exactly what we did.

Standing backstage before my own first scene, the laughter from the crowd indicated we might well be off to a good start on this one and as it continued throughout the show it certainly put our own minds at rest as we ripped through the first act (well, time certainly did seem to fly) and made our way through a quite different second act (different in terms of contrast to the first).

So, with the show up on its legs and at the mercy of the public, we invite you to come along over the rest of the week. Tickets are available for each night by calling and collecting at Langtons prior to 7pm each night, calling and collecting at Rollercoaster Records on Kieran Street prior to 6pm each night, ordering online via our online ticket sales or purchasing tickets on the door. Tickets for each night’s performance cost just €12. Online bookings incur a €1.05 booking fee per ticket.

No more painting, drilling, hammering, sawing. It’s time for acting, and plenty of it. And we’ll be doing it again tonight at 8pm right up to Sunday night.

Thanks also to Rita Tobin, who was in attendance last night, for sending us on some photos of the show. If you’ve anything you would like to share, you can email us to info@devioustheatre.com. We’ll be getting our own show, promo and rehearsal photos online following the run. A few hours to spare before heading back to the theatre, strange to have that additional time in the day 🙂

← Previous Story
Who Is Dario Fo? (And why does he stick it to the man?)
→ Next Story
Through The Square Window…

One Reply to “Accidental Death Opens”