7 Deadly Scenes by What’s On Tom? 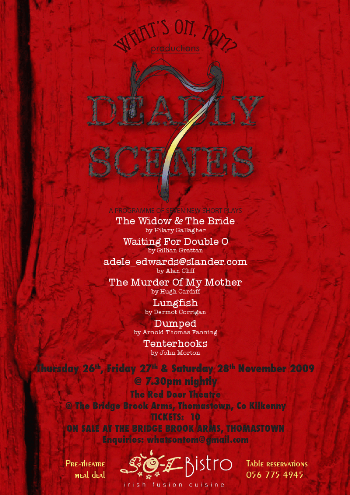 I took a jaunt out to Thomastown last night to watch a night of short plays entitled 7 Deadly Scenes from Kilkenny’s newest theatre group What’s On Tom? (A nice anagram for Thomastown as I’ve just noticed)

I had a play in the mix myself so that saw me nicely comped by the folks at What’s On Tom? so I got to spend a night at the theatre and check out a whole bunch of new plays and actors.The Red Door Theatre at the Bridge Brook Arms was a fantastic small scale theatre and the folks there should be commended on the marvellous job they’ve done with it. A long yellow curtain (donated from an old cinema I was told) and a warm lighting scheme helped create a lovely theatre atmosphere. And it’s also got to be pointed out that the seats were very comfy indeed. You’d be surprised at how many theatre’s get that one wrong and do your derriere a complete disservice.

The plays themselves were a mixed bag of treats but they showed a great variety of writing and acting talent, which bodes very well for future productions from What’s On Tom? The Widow and The Bride by Hilary Gallagher was a short and frenetic start to proceedings. Gillian Grattan’s Bond riffing Waiting For Double O went down exceedingly well with some really fantastic comic performances in the processes, most notably from Eilis Ni Bhroithe. The next play was Alan Cliff’s adele_edwards@slander.com which has to be commended by the last minute addition to the cast of the writer himself, who had to fill in for an absent actor. It didn’t detract in any way from the piece which also boasted some really nice technical flourishes. My personal favourite was Hugh Cardiff’s The Murder Of My Mother, a richly dark comedy which boasted a great comic turn from our old mucker Niall Sheehy, he played Franco Begbie in our production of Trainspotting. He was fantastic in this play as a murderous mummy’s boy. Dermot Corrigan’s weird and wonderful Lungfish opened up the second half with some fine performances and a lot of laughs. Next up was Arnold Thomas Fanning’s Dumped which boasted some fine central performances from Orla Kelly and Ciaran Dunphy. And finally was my own play Tenterhooks, which was lovely to see up on the stage. Sterling work from director Andrew O’Leary and the leads, Lynsey Moran and Jack O’Leary.  And thanks to the folks at What’s On Tom? for choosing to put my play on, it was a real privilege.

So that was 7 Deadly Scenes, a full to the brim night of theatre in Thomastown. Having sold out all 3 performances weeks in advance I think it’s safe to say that there’s a demand there for theatre and What’s On Tom? are in a perfect position to satisfy it. I’m really looking forward to seeing some more works from them in 2010.