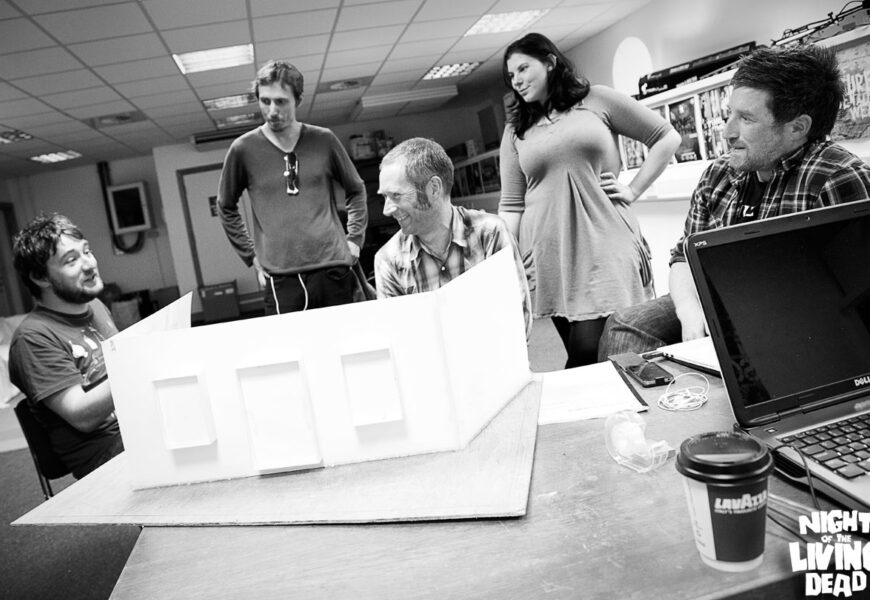 Aristotle’s unities of drama have been around since drama began. So…

In short, Night Of The Living Dead makes a pretty perfect play. By Greek standards at least.

The main unity for our production is that of place. And in Romero’s original movie it was the battered farmhouse in rural Pennsylvania. For us, it’s a slightly more lavish modern house in a ghost estate in Ireland. We are doing the entire play in one location in real time and in doing that, it really helps to have a set that can reflect the characters and contain all the action. And action there definitely will be.

We’ve been working on the set since the end of last year, figuring out how it should look and what it needs to work effectively. We can’t play with the variety of rooms that the film did so we’ve had to work hard to tie the story to the main setting. Not that action won’t be happening in other places, you just won’t see it. Our production designer Niamh Moyles did some mock ups for it back in January, one of which you’ll see below. The final version won’t look exactly like this, but the spirit of what we wanted to achieve is there. Namely, boarded up entrances.

One of the early set mock ups

Our set designer on this production is Harry Harris of Nefarious Design who has made some stunning sets and installations for productions and events in Ireland. His design is going to be one of our best for sure and I think it will perfectly honor the original location of Romero’s films but also give the audience something entirely new. If you live in a modern Irish house, say Celtic Tiger era, it should look very familiar. If you’re just a fan of the original movie, it will definitely remind you of the house Barbara arrives to at the beginning of the film.

Look how much fun they’re all having now!

The exact look of our set is something we’re going to be a little secretive about in the next two months. We’re hoping that everyone going to the play will get the full impact of it when the curtains go up, so we won’t be showing it off in all its glory before then. I guess if you want to see it, you’ll just have to come see the show!

Oh, and there’s no basement. Sorry.

Behind the set mock up taking stealthy photos was Ross Costigan.