We Are Devious Theatre

We will be entertaining you.

Devious Theatre want to, as our moniker suggests, deviate from the usual works that seem to be consistently produced locally as well as nationally and bring a fresh type of theatre that will appeal more to young adults and audiences looking for something a little bit more dynamic. You could say alternative. You could say vibrant. But we’ll be all those things. There’s a huge cross section of young people in the south east who aren’t having theatre made for them. We will make that theatre. There’s a huge audience out there for fresh, vibrant, alternative theatre. We are going to serve that audience.

We’re going to play the big hits for the big crowds and we’ll play them better than anyone. We’ll play all our own original compositions too and we want people to come and see them.

William Shakespeare first performed his plays to drunken, sweaty, rambunctious audiences who shouted, hollered and interracted with the actors onstage. Well, if it’s good enough for him…

We’re not reinventing the wheel. We’re making it spin in a different way. Let’s deviate.

next New Devious Site On The Way
Related Posts 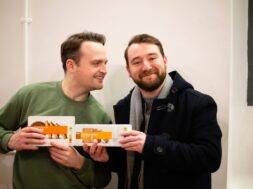