Kilkenny’s grandest theatrical tradition Watergate Productions are serving up their newest production from tonight and it’s a classic. Arsenic and Old Lace is their first offering for 2010 and should prove a fine comedy performed by some of Kilkenny’s finest actors. 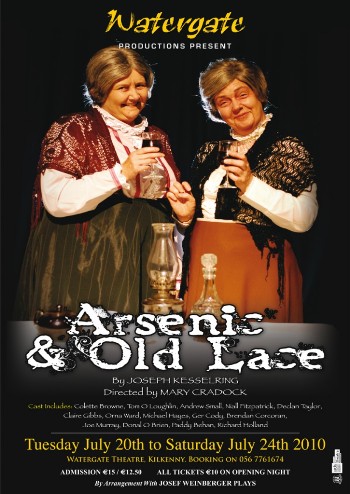 In recent years Watergate Productions have been striking out with new and different productions and have been actively seeking out new material. And it seems to have gone very down well with their devoted audiences as all their recent productions have had packed houses. This one should hit a theatre hungry Kilkenny audience just at the right time.

Arsenic and Old Lace was written in 1933 by American playwright Joseph Kesselring and tells the story of the Brewster sisters who have a neat little sideline in helping older gentlemen meet their maker with the aid of poison. It was later made into a Hollywood movie starring the debonair Cary Grant. This fast paced black comedy features an absolutely stellar cast of Kilkenny theatre stalwarts with a couple of new faces thrown in for good measure. Claire Gibbs and Colette Browne head up a cast that includes Tom O’Loughlin, Brendan Corcoran, Donal O’Brien, Joe Murray, Andrew Small, Michael Hayes, Orna Ward, Niall Fitzpatrick, Declan Taylor, Ger Cody, Paddy Behan and Richard Holland. The production is directed by Mary Cradock.

It opens tonight and runs until this Saturday in the Watergate Theatre, Parliament Street. Tickets cost 15/12.50 and are available from 056 – 7761674.