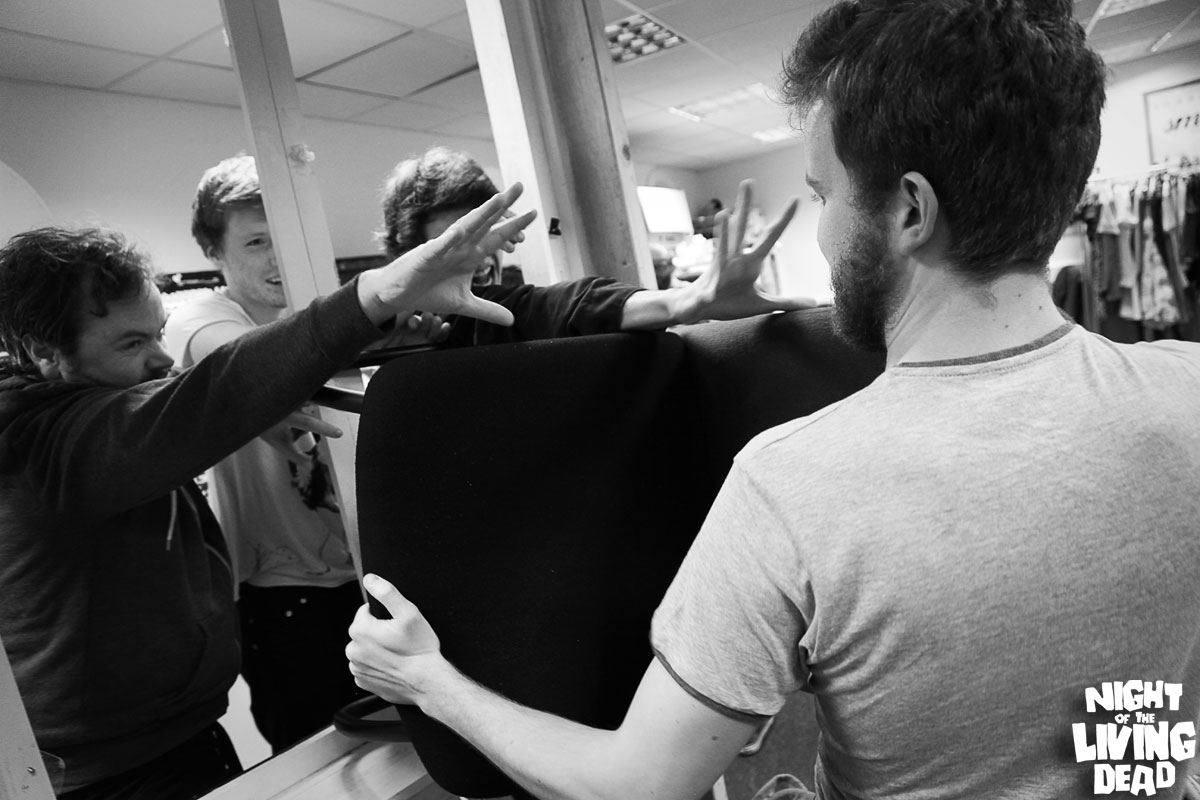 In two days our zombies will be unleashed upon the Irish theatre going public.

But of course, we can’t call them zombies. In fact, in the original Night Of The Living Dead they’re never referred to by the z word at all. And so we’re following suit! They are ghouls, things, creatures… monsters! At one stage in the script writing process myself and Connie had decided to give a nod to the use of the z word and write the following exchange:

Harry: Well, surprise surprise, it’s not just the banks that are zombies anymore.

But we quickly (and wisely) got rid of it because it just opened up our story to an entire world of self referentialism as we could have ended up with a very ironic, self aware play. And that could have destroyed the audience’s ability to engage a nice bit of suspension of disbelief. It can be hard to set something firmly in 2012 and ignore the entire history and prevalence of zombie fiction but hey, when in doubt go back to the master. We’re playing by Romero’s rules on this one… for the most part.

Romero’s zombies are famously slow. And he’s gone on record to say that he’s not particularly keen on the fast ones popular in recent movies like 28 Days Later. As much as we want to wholly honour George and his shambling, slow zombies from the original movies, for our purposes on stage we need to be able to mix it up. Unlike a movie, we can’t edit and we can’t cut away to create suspense, tension or draw out moments. So for the purposes of stage zombies, we need zombies that are both fast and slow.

So our adaptation of Romero’s rules are as such, outlined by the character of Ben, played by Eddie Murphy in our production:

Ben: The fresher ones, the ones just dead, they’re fast enough. The ones that have been dead longer are a lot slower. But if there’s enough of them, they’ll take you.

So that’s how we’re doing it. If you’ve already watched our prologue, you’ve seen our interpretation of the fairly sprightly graveyard ghoul from the original, this time played by Darragh Byrne. We might be having our cake and eating it when it comes to the zombies in this production but we’re confident that the esteemed Mr. Romero won’t mind too much. After all, we don’t use the Z word.

Night Of The Living Dead opens Tuesday July 24th and runs until Saturday July 28th at 8pm nightly in The Watergate Theatre, Kilkenny. Tickets can be booked on 056 – 7761674 and booked online at watergatetheatre.com.