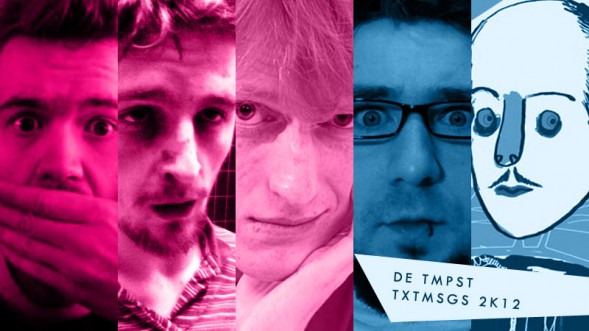 One of the most fun projects we worked on last year was TEXT|Messages in the Project Arts Centre. Based entirely on William Shakespeare’s plays, it was designed to showcase young directors and actors battling the Bard using only 160 lines of his text. And the rules were tight, no editing, consecutive text and no changing the words.

The actions however were a different matter. We saw an awful lot of fantastic interpretations by some brilliant directors and actors over the course of the three nights. We were also delighted at the response to our own contribution, an adaptation of Pyramus and Thisbe from A Midsummer Night’s Dream (yes, we snuck in an entire play within a play, cheeky wha’?). We completely messed with it to the extent that some people in attendance thought we weren’t sticking to the text. We just make it sooooo real you know? Maybe it was the Kilkenny accents of our troupe below. So yeah, we brought cross dressing, glory holes, oral sex, crude musical numbers, night terrors and all manner of lewdness to the text last year. And it seems like we didn’t offend anyone too much because…

We’re delighted to be invited back for this years run!

TEXT | Messages is following up its successful run in 2011 with more Bardcore text. It’s being curated and produced by the lovely and ever so helpful team of Aoife Spillane-Hinks, Conor Hanratty and Megan Riordan who all did a great job last year. Our contribution lands on the first night of this years run on Thursday November 15th! John Morton is again directing a piece of Shakespeare and a very novel spin is being put on it… as we like to do. This time he has enlisted the immense acting talents of Stephen Colfer, John Doran and Eddie Murphy. Three men who have a lot of experience dissecting the Bard, having performed our late 2009 run of Shakespeare In Bits in Kilkenny and Dublin. So these players have a lot of experience messing around with Mr. Shakespeare. In fact, three of them have acted in so many Shakespeare plays in the last 18 months that they could definitely be described as our crack team of Shakespearean thesps.

This time our crack team will be tackling The Tempest, specifically Act 3, Scene 2. We’ll have a nice little progress blog later in the week in terms of how we’re approaching this one. But in the mean time you best get your tickets while you can! Last year sold out very quickly and each of the 9 pieces of the 3 nights will only be performed once. So get on this one quickly! Tickets are only €5 and can be booked at Project Arts Centre, right here.

Remember, it’s rude not to TEXT back.