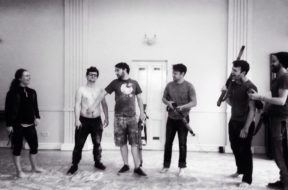 July 12, 2016
John Morton
0
We’re officially a week away from the opening of The Hellfire Squad in Project Arts Centre. Then it’s another week away from taking the show home to Kilkenny and The Watergate Theatre. We’ve been rehearsing for 3 weeks now, 3 weeks that have absolutely flown. The process has not been unlike the training of the […]
Read more 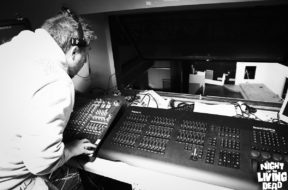 July 23, 2012
John Morton
0
We’ve arrived in the Watergate Theatre finally. And we are now one day away from opening the Irish stage premiere of Night Of The Living Dead. It’s been a long journey getting here. And now that we’re here, it feels like we could do with another 12 months of pre-production. Rule of thumb with most […]
Read more 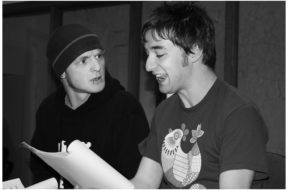 June 6, 2008
Paddy Dunne
0
Choo choo! Well, it’s nearly due to arrive. Due to the fear of mastering Scottish accents, authentically depicting junkiedom and doing Irvine Welsh’s masterful text some justice, we’ve being giving rehearsals the entire sock drawer the past few weeks. We’re nearly at the stage where the entire play is blocked, the scenes are looking in […]
Read more 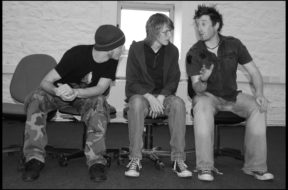 May 28, 2008
Ken McGuire
0
So the rehearsal process continues at Devious Towers (our super sexy rehearsal location smack in the middle of Kilkenny). What with the bank holiday weekend upon us, this week has been pretty intensive so far, and continues to be with two more lengthy rehearsals scheduled for tonight (Wednesday) and tomorrow (Thursday). Speaking from an actors […]
Read more