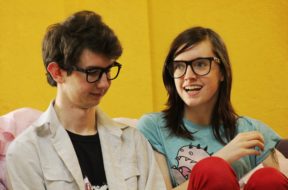 April 13, 2011
Ken McGuire
3
When we began the residency, even before we began the residency at Kilkenny Arts Office, we put out a call for writers to join us for the year. Three of those writers – John Kennedy, Rhian Gibson and Eleanor Walsh – are involved with us in Shifting (writing, acting and assistant directing respectively), which opens […]
Read more