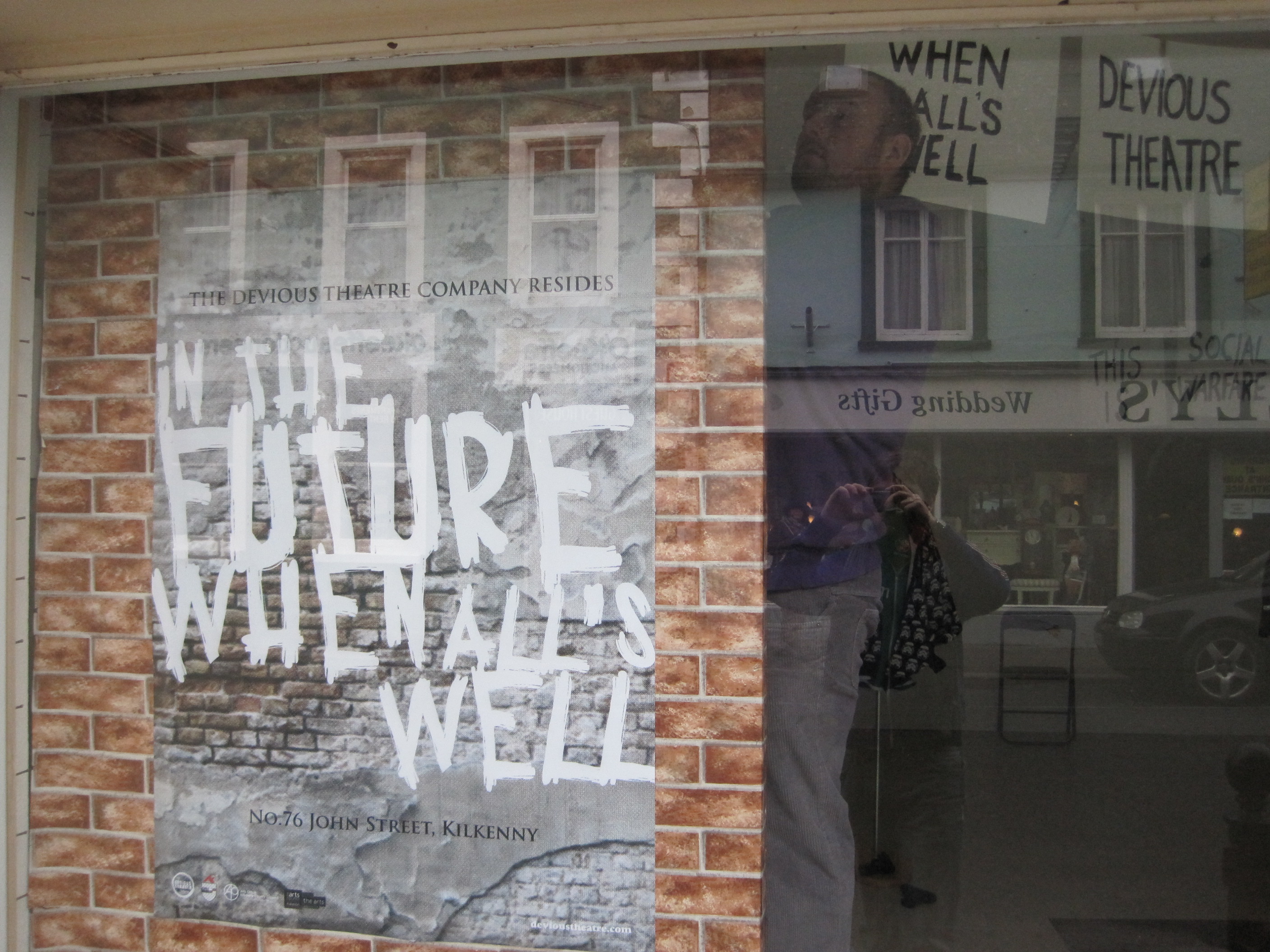 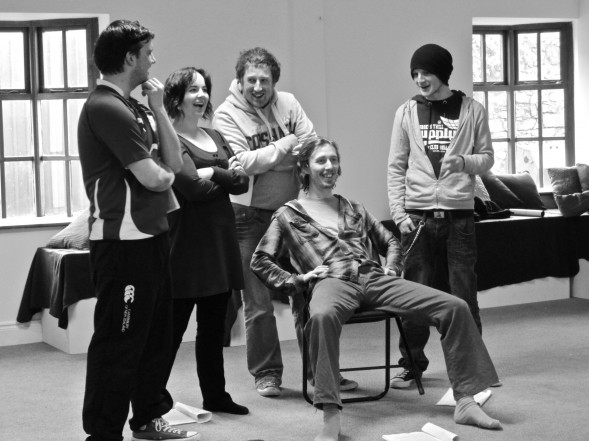 It’s been 3 weeks since we’ve started rehearsals on Scratcher, which funnily enough is 3 weeks since we’ve started our ‘In The Future When All’s Well’ residency here in No. 76 John Street! It’s great to have our own space to work in for a concentrated amount of time (something we’ve lacked majorly in the last few years) as opposed to being a lock picking, squatting, room stealing itinerant theatre company as we usually are.

Scratcher is up and on it’s feet and full of righteous anger, revolutionary zeal, guns and paperwork. As we’re rehearsing in a somewhat public space, it was inevitable that we’d get funny looks from passers by as they gaze through the arch of No. 76 to see Mexican standoffs being performed with sweaty urgency.

As the man with the writer/director name badge I hope to write a couple of rehearsal blogs in the lead up to the show. If I don’t, it’s my fault own fault for multi tasking. For the moment, I’ll refrain from writing too much about the show itself due to my general dislike of talking things into overkill.

What I will do however is write the first in a series of lists that will hopefully illuminate what we’ve been doing so far. So here goes:

1. Breaking Furniture: We’ve already broken about 3 chairs in rehearsal. Ken went through one on the first day and we’ve all followed suit. This leads me to believe that we either need reinforced furniture or reinforced actors.

2. Being Turned On: We’ve been working with the good folks at THEATREclub who have kindly programmed Scratcher for THE THEATRE MACHINE TURNS YOU ON: Vol II which runs in Dublin from February 15th – 19th. Scratcher will play at 7pm on Thursday 17th. We went to launch last week. It was brilliant and we got ice cream and sorbet and then we got tanked on rum. This was when we were meeting and greeting in the Project Arts Centre. Some men for the lols. 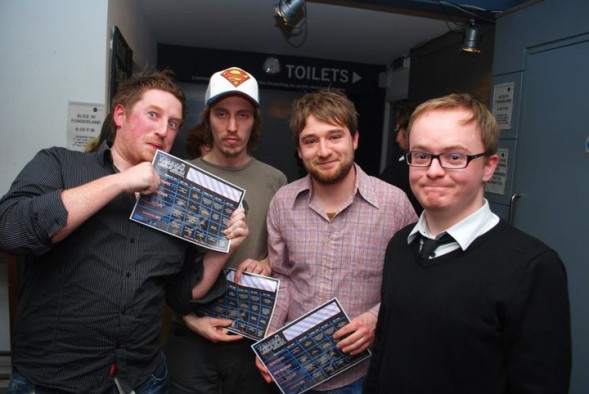 3. Guns, Lots Of Guns: We put a sign in the Arts Office window asking for lots of guns. Donations, of course. And ideally, fake ones. It resulted in a grand total of 0 guns. So instead, Paddy went to Smyth’s Toy Store and bought 10 little blue ones and spray painted them black. Does the trick. We may take the sign down.

4. Getting Promo’d: We shot a lot of promo material for the play including a series of photos and the main poster which you can see on the website and all around the place. Considering the general militant revolutionary vibe of Scratcher, we’ll be releasing videos starting this week that well, have a general militant revolutionary vibe. Keep an eye out.

5. Redecorating: As we’re going to be in No. 76 John Street until well into the summer it’s important to make it feel like home. So apart from our window display, Eddie put in a little screening area where all our past plays can be watched projected on the wall (I won’t lie, we’ll probably use it as our own personal cinema at some stage). We’ve got a nice administerial set up here, a lovely space to rehearse in and all our construction and building bits and bobs set up. We just need to make a few more little departments and we’ll be absolutely made up. Pop in for a visit! The kettle is pretty much always on. 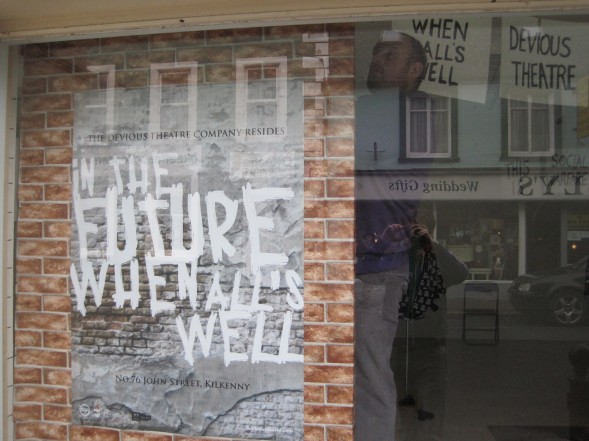 6. Rehearsing: The play is blocked and the rough form of it very much exists. We’ve got our first full run through under our belts. The actors have become very proficient at flying through the air in slow motion shooting two guns at one time while doves fly out behind them. Also, it’s looking like we’ll have to make some cuts to the play in order to fit into our timeslot for Dublin. So yes, I’ll get to present the Director’s Cut in Kilkenny! 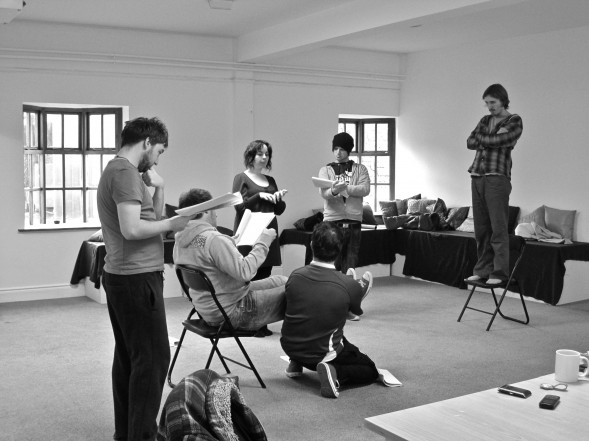 7. Building A Theatre: One of the main points of the residency is to turn No. 76 john Street into a theatre space. It’s currently an arts office. It used to be furniture store. Now we’re going to put 3 plays in here and myriad other activities up until July. And we need to fit in audiences. But hey, we like a challenge. We know where each of the 3 plays are going to go, so it’s going to be pretty exciting transforming the space into Kilkenny’s newest theatre venue. Eddie is currently putting the set in for Scratcher so everyone is delighted to get lots of time on the set before the show opens. Oh, the novelty! Be warned, it’s going to be cosy! 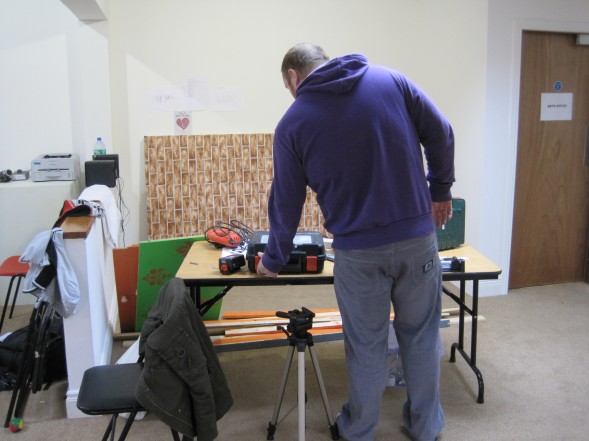 8. Being Mentored: One of the main advantages of taking part in the THE THEATRE MACHINE TURNS YOU ON: Vol II is that we get appointed a mentor. And how lucky for us that we get Annie Ryan, artistic director of The Corn Exchange and current reigning ‘Best Theatre Director’ in Ireland. To say we’re excited about working with her is an understatement.

9. Ball Games: We’ve really gotten into our ball games for warm ups. The space is full of hac-e-sacs, juggling balls, handballs and tennis balls. Our currently keepie uppies record is 118. We hope to smash it by the end of the play. Watch this space!

10. Signing On: One of our first points of duty at the start of rehearsals was to visit the local social welfare office to get a feel for the place, how people move in there and the atmosphere. All with the idea to replicate as convincing a version of it as we can in Scratcher. Myself and all of the cast (apart from Ken, the lousy worker) have had the experience of spending time on the scratcher which certainly helps us but it was great to go there as an ensemble and mix in with the crowd, look for people reminiscent of our characters and immerse ourselves in the atmosphere of what it is to be signing on in Ireland in 2011 in the hope that we can present just that. We’ll be going up again next week. We’ll try our best to not to bring guns.

tags: devious theatre in the future when all's well project arts centre scratcher the theatre machine turns you on: volume II THEATREclub
previous In With The New
next Scratcher Tickets On Sale Now
Related Posts