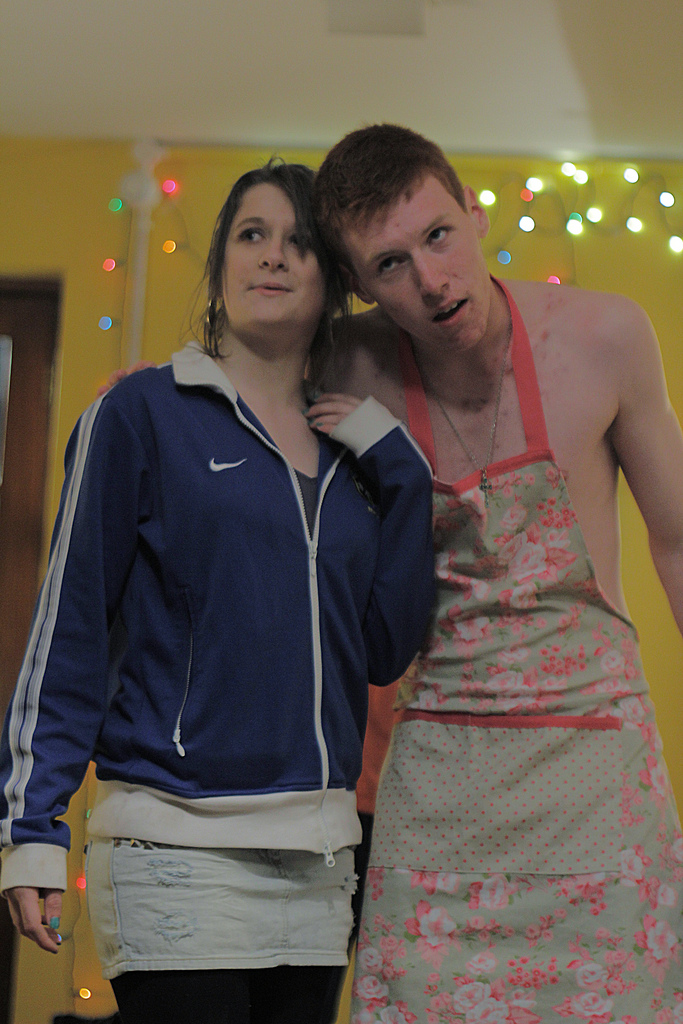 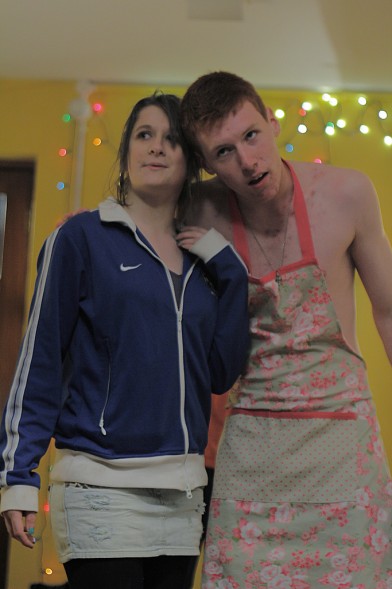 Rhian Gibson played Hilary in Shifting (here pictured with on stage boyfriend Colin O’Brien as Mark)  She’s also been on work placement with us for the past few weeks so she’s been working behind the scenes and has become one of our favourite fixtures in the office. Here’s an account of her time on Shifting:

I thought the audition went much better than I expected. I thought I would be nervous but nerves didn’t really come in to it.

Waiting to see if I got cast in the play was almost torture, then BAM; I’m picked to play a stereotypical looking English chav. Good thing I’m English.

Drowning my insides with tea, stuffing my face with custard creams and practically ruining rehearsal time with my constant coughing and spluttering.

Staggering through in my belt of skirt and orange stripper boots; the costumes were fun to look at.

The day of the photo shoot was hectic, rushing around getting ready, applying layer after layer of foundation and bronzer. But when the time came to capture the image for the poster; it was too comical to not laugh. I did it though. The poster looked great.

Shooting the promo video was far more awkward then I first imagined. Having to kiss someone in front of a man with his camera seemed a tad surreal; looked great though!

Writing one of the radio pieces to help promote the show then hearing it on KCLR made my day.

Talking and laughing could be heard clearly from the girl’s dressing room, over the ‘sizzle’ of the hair straightners.

The table was filled high to the ceiling with orange covered facial wipes; a montage of my loud mouthed, chavy character: Hilary.

Having to record my voice so my accent could be mimicked was just plain weird.

The opening night was brilliant, the whole show was run on pure adrenalin and I enjoyed every minute of it.

At least my hands aren’t marked from knocking the crap out of the door. (The crack in the glass is nothing to do with me…)

Outside trying to listen for my cue, my face almost smeared across the window but luckily we were soon able to hear everything through speakers; otherwise I’d still be waiting.

Hiding out in the kitchen, sitting on the floor and drinking pint after pint of tap water and waiting to go out in front of the audience without pissing myself.

I’ve learnt that it’s easy to stay away from something for a long time then to start again, as though it was just yesterday.

I could easily do another week but maybe with less effort.

Fighting back the urge to ‘high five’ a member of the audience was tough; we were close, real close, practically shifting.

Getting six standing ovations for a six night show was incredible, everyone worked so hard and I was exceptionally proud to be part of such a talented group of people. We officially acted our socks off.

The Shifting week was such a buzz, bouncing from scene to scene, night to night; filling in the gaps with incredible banter and epic amounts of dancing.