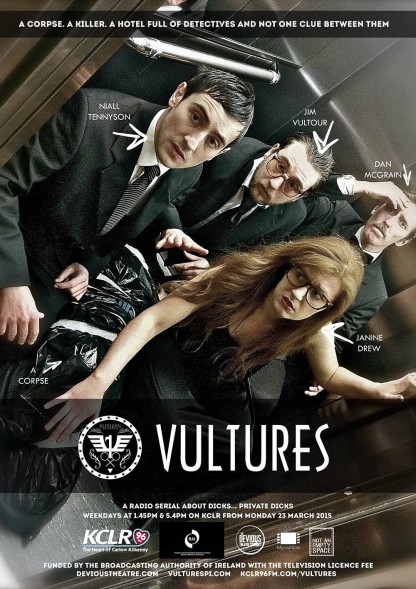 Vultures is a 20 part murder mystery radio serial focusing on the private detectives of Vulture Private Investigations, a small time detective agency in south east Ireland. Janine Drew, Dan McGrain, Jim Vultour and Niall Tennyson are the detectives in question and the story follows them as they get caught up in a suspenseful murder mystery at the Detective Union Of Ireland AGM. The show follows the varying perspectives of the four bungling sleuths as they trawl the corridors of Wisteria Lodge, searching for a killer, quizzing a colourful cast of suspects and trying to figure out who killed Ireland’s most famous detective Basil Maguire? And why?

The show was produced by Devious Theatre in conjunction with KCLR96FM. It first aired on KCLR96FM from March to April 2015. Vultures was supported by the Broadcasting Authority Of Ireland.

It is written and directed by John Morton, produced and engineered by Ken McGuire with Alan Slattery as associate producer and an original score from David Sheenan.

This programme was funded by the Broadcasting Authority of Ireland with the television license fee.