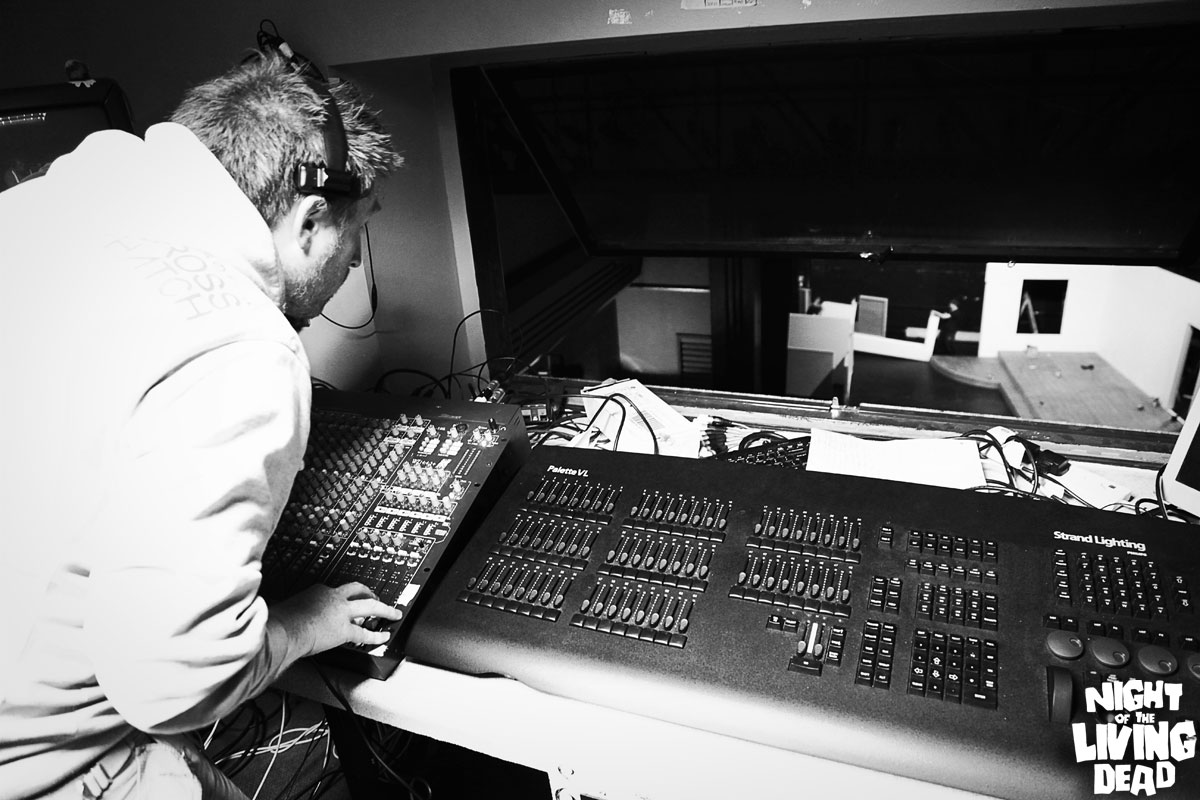 We’ve arrived in the Watergate Theatre finally. And we are now one day away from opening the Irish stage premiere of Night Of The Living Dead.

It’s been a long journey getting here. And now that we’re here, it feels like we could do with another 12 months of pre-production. Rule of thumb with most shows is that there’s just never enough time. Never. And it’s definitely the case here. The last week of rehearsals on Night Of The Living Dead have seen a whole bunch of new elements being thrown at the cast and crew. Blood, guts, gore, breakfast cereal, real tea (always scald the pot!) and a whole new array of updated and improved zombie bashing weapons. It has been an intense final stretch on proceedings.

The last week of rehearsals nicely mirrored the cabin fever aspect of the play. It was a lot of people in the close confines of our rehearsal space (it looks a lot bigger in photos) and so a certain degree of cabin fever kicked in. We were living in each others pockets in rehearsals and then we’d have to go and try and kill each other. Some people probably found it a lot easier than others. What our final intense week of rehearsals did however was absolutely nail the play together. All the elements: the relationships between the characters, the fear, the emotion, the humour, the anger and of course, fighting back the living dead.

At the end of the week, we were satisfied that we had realised our intention of making a damn entertaining, darkly comic zombie drama. But we had that antsiness where we wanted to take it to the next stage. Literally. We needed to hit the stage with it. So on Friday we hit the Watergate Theatre to get our set in place. It’s been an intense few days of building, painting, dressing and constructing. Right now, our set is looking pretty spectacular. And it’s fairly zombie proof… so far anyway.

Finally getting the show onto the stage of the Watergate Theatre has changed everything. It looks suitably epic. The scale is bigger than anything we’ve dealt with before and we’ve managed to fill it quite nicely whilst also managing to maintain that tension necessary for a zombie siege drama. Harry Harris has done an amazing job of designing and putting this construct together. It’s by far our biggest, sturdiest set to date and with a cast of 20 busting themselves off of it, it really needs to be. Our crack team of theatre professionals have been working overtime to get everything in place. I also have to give serious props to a cast of stone cold troopers who have been busting their asses to block, reblock, rehearse, revise and rekill multiple times every rehearsal. There will be bruises at the end of this week.

Last night we had our tech rehearsal. Lights, sound, all the actions. Everything is rigged and ready to go. Actors are about to hit the theatre to warm up and go over the notes from last night’s performance. Tonight it’s the main dress rehearsal which we’re pretty much treating as the first night of the show. So in that case… this is it, we’re opening it tonight. Night Of The Living Dead is about to open. It’s been a year of hard prep and an absolute overdose on every bit of zombie fiction going. It’s been a blast but it’s not over yet, oh no. We hope you enjoy watching it as much as we’ve enjoyed making it.

So here it comes, here comes the night…

Photos by Ross Costigan (He stands really close to the actors)